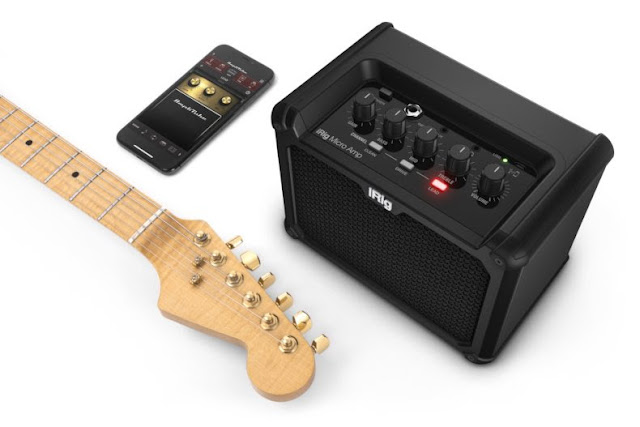 IK Multimedia announces the availability of iRig® Micro Amp, a battery-powered, ultra-compact combo amplifier with three on-board analogue channels plus a high-quality digital interface for direct connection to iPhone, iPad, Mac and PC. This allows users to expand their tone palette by unlocking a variety of amp and FX models in the included AmpliTube software/app bundle, as well as connecting to their favourite apps for learning, recording and playing. iRig Micro Amp also offers powerful sound that rivals larger amps, plus the ability to connect to external cabinets for even more volume.


Three analogue channels - clean, drive and lead - deliver a full palette of sounds with a distinctive character, created by the same tone gurus behind IK's award-winning AmpliTube software. On board are bass, mid, treble and gain controls to cover a wide range of tones. iRig Micro Amp offers 15W power (7.5W when running on batteries), and combined with its 4" custom-voiced speaker, pumps out surprising volume at half the size of similarly-powered amps. When additional volume or a bigger speaker is needed, iRig Micro Amp also offers a 4Ω cabinet output to keep up with a full drum kit for band practice.

Weighing only 2.6 lbs. (1.2 kg), iRig Micro Amp is one of the most compact amps in its power range. With its compact size that fits in a backpack, and flexible options, iRig Micro Amp is an extremely portable and convenient option for everything from a bedroom or desktop, to jamming with friends or street busking anytime, anywhere.

Derived from IK's industry-leading iRig HD 2 mobile guitar interface, iRig Micro Amp's iOS/USB connection lets players connect to their iPhone and iPad directly without additional accessories. Additionally, it connects to a Mac or PC to process their tone with IK's AmpliTube and use their favourite practice, performance and recording apps and software. The guitar's signal is sent to their device for processing, and the return output plays back directly through the amp's 4" speaker, eliminating the need for other accessories. It's an entire setup in a single integrated unit, with pristine 24-bit, 96 kHz sound quality.

With the included AmpliTube app and software, iRig Micro Amp can deliver a massive range of tones with unbelievable realism. iRig Micro Amp users can download AmpliTube to unlock 10 amps and 26 stompbox effects in AmpliTube CS for iPhone or iPad, and 9 amps/10 stomps in AmpliTube 4 for Mac/PC, for free, providing powerful ways to process their tone right out of the box.

Guitarists can also expand their sonic collection a la carte with IK's range of additional amp and effect models - there are over 280 pieces to choose from, including officially licensed re-creations of gear from Fender®, Orange®, Mesa-Boogie® and other iconic gear manufacturers, as well as guitar legends like Slash, Jimi Hendrix and Dimebag Darrell, all available as in-app purchases or Custom Shop collections.

iRig Micro Amp is fully compatible with dozens of popular learning, practice and performance apps, making it fun and easy for guitarists to learn new licks, polish their technique, or jam along with their favourite songs.

iRig Micro Amp users can easily start recording their own musical ideas and tracks with apps like GarageBand. They can also connect to professional recording software like Logic, Pro Tools, Cubase, Ableton Live and more, creating a convenient desktop setup for use on the go.

iRig Micro Amp is powered by 6 x AA batteries or an optional 9V power supply. It includes an auxiliary input and headphones out for silent practice, as well as a cabinet output to power external speakers for band practice or smaller gigs. 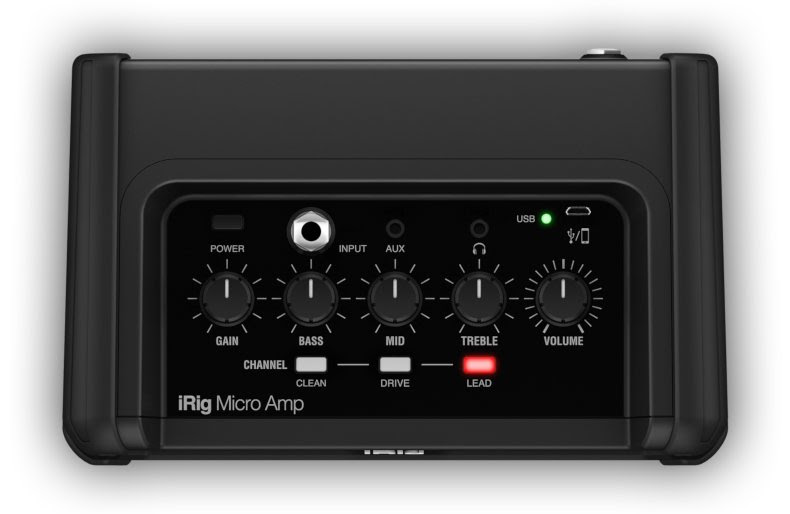