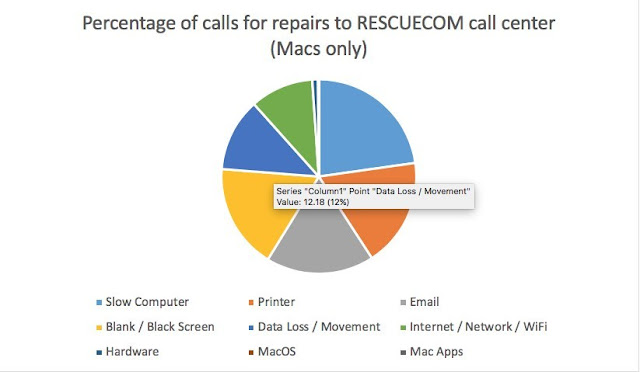 Apple computers and the MacOS are widely thought of to cause very few problems for the millions of people who use them.

However, Apple computers suffer some of the very same problems as those with Windows, what unique issues might you potentially have to deal with at some point?

The most common problem with the MacOS and Apple computers is startup difficulty. This typically involved the computer failing to start up properly, leaving users with nothing more than a blank screen or in some cases a gray startup screen rather than their desktop. The best option in these cases is to boot up in Safe Mode. The computer will automatically start with the bare minimum software and drivers needed to run. It will then run a diagnostic check and repair any software issues causing the problem.

Apple users can sometimes face the "White Screen of Death" or the spinning beach ball when processes or apps freeze. When the computer is frozen in this white screen, it will be unusable until it is restarted. The fix for this is simple: upon restarting, open the OS X utilities menu using the option and R keys. From there, you can use disk utility ("repair disk"), and the problem is solved. For the spinning beach ball, you can use your activity monitor to force programs using too much memory to quit. 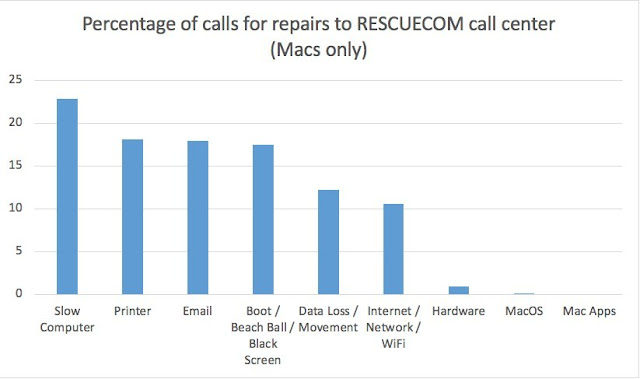 Another issue affecting Mac and Apple users is caused by apps which are incompatible with MacOS automatically opening upon startup but causing problems because of their incompatibility. This can cause your computer to fail to boot up. The only way to find out what app is causing the problem without professional tech support is to check the startup disk in utilities. Interestingly, it is not at all difficult to find the culprit, as your computer will automatically move all such software into a folder labeled "Incompatible Software" on your startup disk. You can then choose to simply delete it if it is not important to you, or you can find an updated version on the Apple store to download.

There are a few more, much smaller issues, Apple computers using the MacOS can run into as well as the larger problems above. An app may freeze, causing you to be unable to do anything include closing it. You can force the app to quit using the Command-Option-Escape key combination. A Mac may sometimes quit connecting to your regular Internet network for seemingly no reason, and you can almost always solve this by going into your network settings, forgetting your network, and then reconnecting again.

If you have an issue due to faulty hardware, Apple provides a diagnostic suite to test and fix them. This is the Apple Hardware Test for older models and Apple Diagnostics for any computers built in 2013 or later. You can access both by holding the D key after restarting.