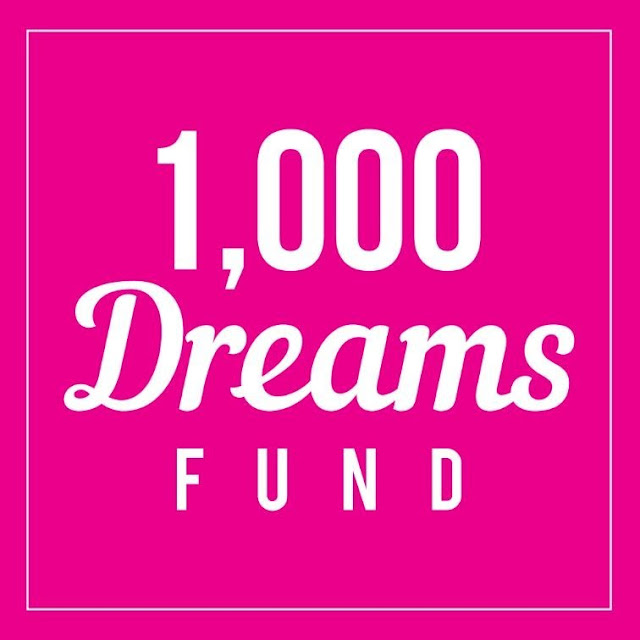 Today, the 1,000 Dreams Fund (1DF), a national non-profit that provides micro-grants to young women for their career goals, is excited to announce the second year of the Streams for Dreams(#Streams4Dreams) event in honor of Women's History Month.

In partnership with Twitch and their community, 1DF's goal is to raise $50K by March 31 with all proceeds raised going to its 1DF-Twitch BroadcasterHER Grant Program. Launched in 2018, the grant program was specifically created for female broadcasters on Twitch. Over $30,000 has been granted out by 1DF, so far, to talented female content creators across the globe.

"At Twitch, we are always working to build both an inclusive and diverse brand, empowering our creators to make their own entertainment with their communities," said Alyssa Sweetman, Charity Program Manager at Twitch. "By partnering with the 1,000 Dreams Fund once again, we are elevating the importance of gender equity during Women's History Month to highlight our mission of helping creators make a living entertaining and educating their fans."


In keeping with its mission, 1DF designed this charity initiative to directly support underserved female content creators. With the gaming industry projected to reach $1.65 billion in global revenue by 2021—according to Newzoo—1DF seeks to help empower the rising numbers of female streamers, content creators and esports athletes to succeed both on and behind the camera. Additionally, women in the gaming industry face considerable challenges when seeking financial support to fund creative projects within their careers, not to mention a general shortage of financial support for women in this space.

"The 1DF grant represents hope for female streamers on Twitch," says @Sabra_cat, a Final Fantasy XIV devotee and 1DF-Twitch BroadcastHER Grant recipient from 2018. Out of over 700 applications for the first round, she was one of 50 grant winners announced on August 1. "This is so important because of the unequal representation of women. This grant gives a considerable leg up for a quality setup—but also helps uplift and inspire females to strive toward their own big and bright dreams in the industry."


Streams for Dreams has proven to be an effective fundraising event, raising over $44K its inaugural year in 2018 via peer-to-peer encouragement and communication. This year, a number of female Twitch broadcasters will be featured on Twitch's homepage throughout the entire month of March. For all participating streamers, who range from gamers to makers, 1DF is offering incentives including their new BroadcastHER T-shirts.

"Our goal is simple: the more money we raise, the more women we can fund," says 1,000 Dreams Fund founder and CEO Christie Garton. "Equally important is that each initiative increases awareness—and hope—that we can help eventually close the gender gap in funding. Streams for Dreams allows the Twitch community to come together for this important cause, and to have fun while doing it!"


Last year, Streams for Dreams coincided with the launch of the 1,000 Dreams Fund - Twitch BroadcastHER Grant, which was specifically created to help female content creators transition their passion into a career. All funds raised during the Streams for Dreams event will go directly back to women broadcasters in need through the BroadcastHER Grant program. Grants, ranging from $500 - $2,000, will be awarded to female Twitch creators in 2019 for items that align with 1DF's funding mission. Those items include conference travel, equipment upgrades, workshops, and more.

To learn more about Streams for Dreams, visit https://tiltify.com/1000dreamsfund/streams-for-dreams.

To learn more about 1DF's BroadcasterHER Initiative, which is committed to supporting the advancement of women in broadcasting and gaming, visit
https://1000dreamsfund.org/programs/broadcasther-initiative/.

About the 1,000 Dreams Fund
The 1,000 Dreams Fund (1DF) is a national scholarship fund for American girls in high school and college. 1DF believes that big expenses should never stand in the way of big dreams. Since its launch in November 2015, over $150,000 in funding has been granted to talented young women in need, helping them pay for the "extras" in school like study abroad, tech devices for the classroom and travel to conferences and seminars. 1DF has been featured on Cheddar TV, NBCNews.com, USA Today, MarketWatch, Forbes, Huffington Post, Chicago Tribune, Entrepreneur, TODAY and others. To learn more about 1DF, visit http://1000dreamsfund.org/

About Twitch
Launched in 2011, Twitch is a global community that comes together each day to create multiplayer entertainment: unique, live, unpredictable experiences created by the interactions of millions. It brings the joy of co-op to everything, from casual gaming to world-class esports to anime marathons, music, and art streams. Twitch also hosts TwitchCon, our biggest brand-led event of the year, where we bring everyone together to celebrate, learn, and grow their personal interests and passions. We're always live at Twitch. Stay up to date on all things Twitch on Twitter and on our Blog.