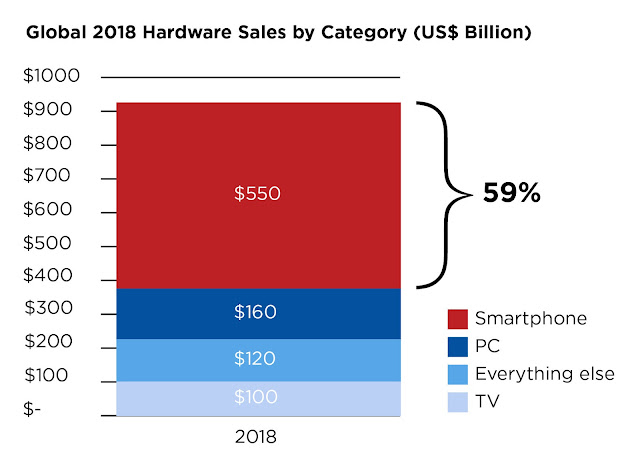 Mobile World Congress is the largest and most important mobile tech trade show globally. With 110,000+ attendees; 7,700 CEOs; thousands of international journalists and 2,400 exhibitors from more than 200 countries will be participating, MWC is where the industry's most important mobile products are launched and innovations revealed.

Disruptive Innovation: 2019Smartphones are eating the consumer tech world. A staggering 59% of all global consumer tech spending was on smartphones in 2018.
Smartphones Are The World's Computing Device Of Choice
5G Revolution The 5G revolution will be the most discussed topic at MWC. The very first 5G smartphones will be introduced this year and are predicted to sell only 2 million units worldwide, but this will explode in coming years, reaching 1.5 billion 5G smartphones sold in 2025.
5G will bring blistering fast speed. With 5G you'll be able to download a Hollywood high definition movie in 3.6 seconds. Throughput will be 100 times faster than 4G LTE.
5G will also allow:
Artificial Intelligence will be the second most discussed topic at MWC. A $1,000 smartphone has more raw computing power that IBM's Deep Blue supercomputer of 1997 that cost $100 million. People walk around with smartphones in their hip pockets at all times. Today, Artificial Intelligence (AI) is being embedded in smartphones. This is enabling exciting new features, including:
Artificial Intelligence in all technology – not just smartphones -- is predicted to create $3.9 trillion of business value by 2022.

Wearables
Smartwatches are the fastest growing category of wearables. In 2019, 46% of smartwatches will ship with their cellular connection, which means the watch doesn't have to be paired with a smartphone. And, eHealth data promises to transform health care.

#MWC19 - Official Hashtag
The official hashtag for Mobile World Congress is #MWC19. Jim will be live tweeting his insights on what's new and exciting. You can follow his Twitter account at @JimHarris.

Jim Harris is a leading international disruptive innovation speaker. His last book Blindsided is published in 80 countries worldwide and is a #1 international bestseller. You can see one of his talks at https://www.youtube.com/watch?v=WbfRPztsKLY

Jim Harris is one of the Top 50 digital influencers in the world.