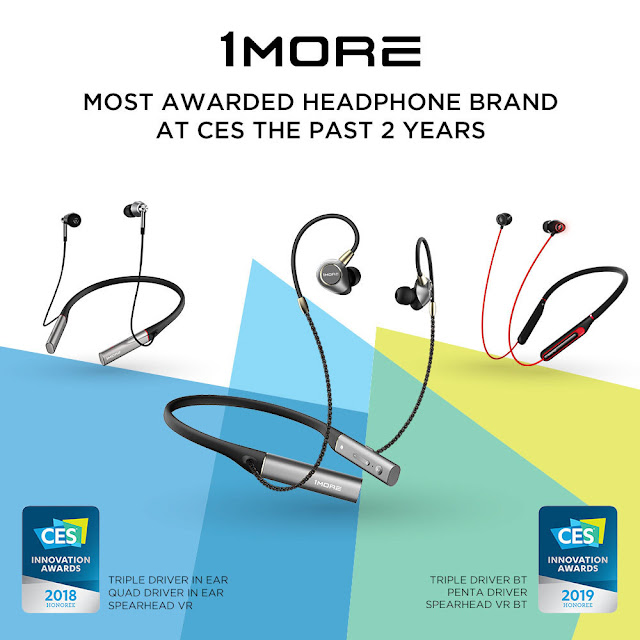 1MORE headphones announces it has received a CES 2019 Innovation Honoree Award for its Penta Driver In-Ear Headphones, Triple Driver BT In-Ear Headphones, and Spearhead VR BT In-Ear Gaming Headphones in 2019. Products chosen as CES Innovation Honorees reflect innovative design and engineering in some of the most cutting-edge tech products and services coming to market. 1MORE is the only headphone brand to win such distinction two years in a row. The Penta Driver ($199) is available in early Q1 2019, the Triple Driver BT In-Ear ($149.99)and VR BT In-Ear ($149.99) are available at 1MORE.com and other premium online retailers. In addition, 1MORE's Dual Driver BT ANC In-Ear Headphones are available with $20 off during January 7th-9th exclusively through The Verge - just use the code "VERGE20" on 1MORE.com

1MORE's new flagship model, the Penta Driver In-Ear Headphones (Penta Driver) are dedicated to audiophiles as well as everyday music lovers. 1MORE meets the high standard set by audio enthusiasts by providing professional features aimed at delivering sound quality, comfort, noise isolation, and functionality. 1MORE's Penta Driver has a universal earpiece with a tri-flange design, so they are easy to use right out of the box. The earbud itself features an ergonomic design with oblique angle for a natural fit in your ear, and a silicon rubber ear hook to secure the wearing. A fine counterweight is integrated to further ensure stability while wearing the earphone in motion.

The Penta Driver also features a Type C to 3.5mm connection giving users the choice of wired or Bluetooth listening. These Penta Drivers are compatible with all the major Bluetooth codecs including: AAC (iOS), AptX, and LDAC (Android) for a close-to-lossless high-quality wireless listening experience optimized for whichever device you are using. AAC is geared towards iOS devices, and offers higher resolution and a higher decoding rate with less storage. LDAC transmission technology enables 990 kbps of transmission speed which is 4 times faster than ordinary Bluetooth, providing a lossless hi-res wireless listening experience. The Penta Drivers aim to be THE best wired + wireless 5-driver earphones for years to come. As with all 1MORE products, it is expertly tuned by Grammy Award-winning sound engineer, Luca Bignardi, to deliver a precise representation of the artist's expression through 5 accurately tuned balanced armatures.

Also being announced at CES is 1MORE's first foray into the bluetooth speaker market with a dual driver, high resolution portable speaker and a gaming headset, both available later in 2019. "2019 is the year where 1MORE will be delivering some of the best wireless and true wireless solutions on the market," says 1MORE Headphones CEO, Frank Lin. "Our latest offerings are in line with 1MORE's mission to deliver superior products at prices everyone can afford."

1MORE Products will be displayed at CES Unveiled Las Vegas, which features dozens of exhibitors, networking opportunities and runs 5:00-8:30 PM January 6th at Shoreline Exhibit Hall, Mandalay Bay. 1MORE's CEO Frank Lin will be giving a keynote at the SVIEF Conference at the Milano Ballroom at Caesar's Palace on January 8th from 6:00-9:30 PM. 1MORE will also be at PEPCOM Las Vegas from 7:00 -10:30 PM PM Monday, January 7th, at the Mirage Hotel and Casino. In addition, 1MORE's 2018 & 2019 product collection will be displayed at CES 2019, which runs January 8-11, 2019, in Las Vegas, booth #35820 at Tech East, South Hall of the LVCC.

For additional information, visit ww.1MORE.com or see 1MORE products as featured on www.CES.tech/Innovation, which lists product categories, as well as each product name, manufacturer information, description, photo and URL.