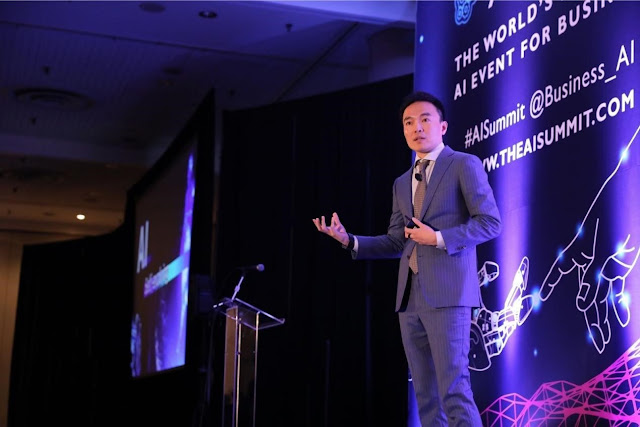 On Dec. 5 and 6, the world's largest AI event for business, The AI Summit, was held in New York. More than 350 experts, professors and business executives from the field of AI around the world attended the summit to discuss such issues as AI technology and the commercial application of AI, etc. Derek Haoyang Li, founder of Squirrel AI Learning, was invited to give a speech at this year's summit.

With the rapid expansion of big data collection and computing power, rapid progress has been made in AI technology research. The application of AI in manufacturing, services, retail, medical care and other industries is also expanding. Education, a profession that maintains the intergenerational succession of human culture, is no exception. To some extent, education must keep up with the development of AI technology, so as to ensure the historical status of mankind at the top of civilization.

On the other hand, the development of education also depends on the progress of AI technology. At this summit, Derek Haoyang Li, Squirrel AI Learning's founder, delivered a keynote speech titled "How to Give Every Child Adaptive Education". He summarized the disruptive innovation by AI in various industries, as well as the radical innovation made by Squirrel AI Learning in intelligent adaptive education, which were highly recognized by experts and scholars attending the summit.


A summary of Derek Li's keynote speech is presented below:

The upcoming AI era, like the industrial revolution, will be one of the epochal events that can change the course of human history. Specifically, the reasons why AI can have such great power are as follows:

First, it's versatile and know-it-all. IBM Watson can read more than 3,000 books, 240,000 papers, data from more than 600 experiments and 100 thousand clinical reports from patients in 17 seconds. Project Debater can debate any open conceptual topic without specific training. The versatility and know-it-all feature of AI have been widely used in every industry.

In terms of education, AI can break down and master all the nanoscale knowledge points, have a good grasp of the countless correlations between knowledge points, and provide "one-on-one tutoring" for thousands of students, which is an almost impossible task for human teachers.

Second, it can tell big stories from small things. Zuckerberg once said: "AI already can notice things that humans can't."That is gradually becoming a reality. For example, by using big data, AI algorithms and other technologies, Toutiao can judge each user's preferences through each click by users. By dividing human faces such as eyes, eyebrows and nose into millions of tiny pixels, SenseTime's face recognition is already a million times clearer than human eyes. In the same way, Netflix can detect the cognition and preference of every viewer from the data of every frame, and then find the logic of making and reshaping a film from the subtle differences. Using this trait of AI, Squirrel AI can clearly detect each student's mastery of knowledge points, knowing which knowledge points are already grasped and which are gaps left from the past, so as to help students solve their problems purposefully.

Third, it has infinite computing power. Elon Musk said: "a computer can operate at a speed of 1 million bits per second, while the speed of the human brain is only 10 bits per second." In this sense, the information processing speed of AI is much faster than that of human beings. When AI plays against a top-level human player, it can check millions of possibilities in 0.01 second and choose the optimal solution. Using the system's infinite computing power, Squirrel AI can label each question and split students' abilities, so as to clearly know the user profile of each student.

Fourth, it's self-evolving. The father of tablets Jerry Kaplan once said publicly: "in the future, AI will not only imitate human beings, but also surpass human beings." This is because AI has the ability of self-evolution. "Sunshine gathers, and light flows into my dreams." This is a line of verse created by Microsoft Xiaoice. Although it has been criticized by many experts, it's better than what 90% of human beings can do. The deep learning network of AlphaGo can help Google improve energy efficiency by 15%. It can save Google hundreds of millions of dollars in the near future. In the field of education, the evolutionary power of Squirrel AI is also amazing. It has skills that human teachers do not have. It can automatically help students make up their knowledge gaps and stimulate students' creativity and imagination.

In recent years, a trend of "AI+ education" has emerged both at home and abroad. Data shows that in China alone, more than 50 education institutions or companies claim to have adopted the latest AI technology. But "AI+ education" doesn't happen overnight. It's about really understanding the nature of education and building your own barriers in technology and business model.

At present, auxiliary AI tools, such as pronunciation assessment and emotion recognition, cannot get involved in children's cognitive learning process. What parents are most concerned about is how a product can help their children to learn. AI+ education will eventually return to teaching and learning. Therefore, AI adaptive education is the best application scenario of AI+ education. Squirrel AI Learning has been in the forefront in this field in China.

First, super-nano knowledge point splitting. In the intelligent adaptive learning system of Squirrel AI, a subject in junior high school has been divided into more than 30,000 knowledge points. Such super-nano splitting makes it easy for students to find the knowledge points they have or have not mastered, so as to learn with a clear objective.

Fourth, they initiated the concept of knowledge map reconstruction based on mistakes. On the basis of finding the real reason for making mistakes, Squirrel AI adaptive learning system can develop personalized learning plans for children and finally solve their problems.

Fifth, they initiated the versus model. Using Bayes' theorem, Squirrel AI forms a versus network. Based on simulation and Squirrel AI Learning's adaptive technology and educational psychology model, machines can simulate learning and competition between students and teachers.

At the AI Adaptive Education Conference (AIAED) which just ended in November in Beijing, Prof. Tom Mitchell, the godfather of global machine learning, dean of CMU School of Computer Science, a member of the American Academy of Arts and Sciences and the National Academy of Engineering, an AAAS fellow and AAAI fellow, officially accepted Squirrel AI Learning's offer of the position of Chief AI Officer. As Squirrel AI Learning's first person in charge in the field of AI, Mitchell will lead a team of more than 10 AI scientists and hundreds of AI application engineers and technical teams to conduct basic AI research in the field of intelligent adaptive education, as well as the development and application of related products.

In fact, Squirrel AI Learning's new education retail business model is also a reform of the traditional education model. On the one hand, Squirrel AI Learning not only has changed the traditional model of teaching by teachers, replacing it with teaching by AI, but also has realized intelligent management of students' learning. In the past, every student's data was opaque. Now through the Internet and AI, all students' learning process data and teaching data are collected, to provide better quality services for students. Transparent data management has changed the traditional offline education model. At present, Squirrel AI Learning has served more than one million students. The contract renewal rate is about 80% where the average rate is about 50%. It has established a good reputation among users.

Squirrel AI Learning is globally leading in both core technology and business model. But its journey of changing and revolutionize traditional education is far from over. "In terms of technology, we're testing brain wave patterns to identify changes in students' attention spans. In the future, it will be widely used." Derek Li said: "next, Squirrel AI will become a super AI teaching robot integrating personalized learning, dynamic learning objective management, human-computer dialogue, emotion and brain wave monitoring, to provide every student with high quality education and teaching services."