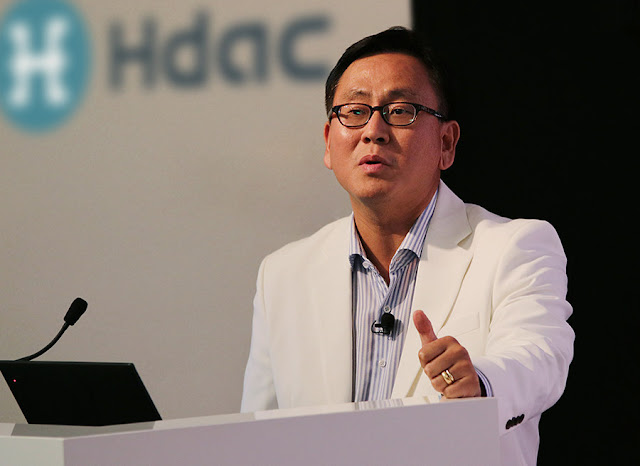 Hdac Technology, founded by Chung Dae-sun, the CEO of Hyundai BS&C, has announced the launch of the world's first enterprise solution combining blockchain and the Internet of Things (IoT) at the IoT Blockchain Summit 2018 in Atlanta, USA, which was held on October 29-30 (local time).

The event is a business conference, with 85% of its participants being key executives who have the decision-making authority in corporations. Representatives from more than 40 companies were in attendance, including IBM, Oracle, Siemens, Shell, Verizon, AT&T, FedEx, Airbus, and IOTA.

"We have developed the blueprint and key technologies of our BaaS (blockchain-as-a-service) platform for enterprises, which marries the strengths of the IoT and blockchain, based on our public-private hybrid blockchain platform 'Hdac,'" said John Sang-Ug Bae, Chief Operating Officer of Hdac Technology, in his keynote speech at the conference.


Current IoT services have distinct platforms and architectures, making it difficult to control heterogeneous devices or connect them into a blockchain network. This compatibility issue has been a major obstacle to commercializing the IoT and implementing a blockchain convergence model. To address this challenge, Hdac developed the H-UMBA (Hdac Universal Multitenancy Blockchain Adapter) by adopting the concept of an abstract blockchain layer.

A key technology for Hdac's BaaS solution, H-UMBA is the world's first IoT platform architechture designed to manage and broadcast control information between heterogeneous IoT devices to their desired blockchain transactions. Hdac plans to offer an adapter package that supports multiple IoT platforms and blockchains in order to allow for timely development and universal usage.

"Hdac BaaS will enable companies with either blockchain or IoT capabilities only to easily implement services which combine both technologies," said Bae. The company has already filed a patent application for H-UMBA in Korea and is in the process of doing the same in key countries including the USA, the UK, and Germany.

Michael Yoon, CEO of Hdac Technology, said, "Since IoT and blockchain started being hailed as key technologies in the Fourth Industrial Revolution, a host of companies from startups to global tech giants have scrambled to get ahead of the game. This is getting in the way of commercializing the two technologies. We will embrace the both to usher in a paradigm shift and lead a true convergence of IoT and blockchain."