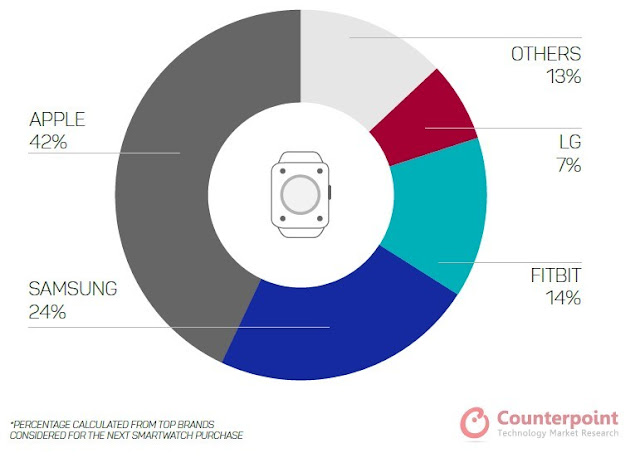 Boston based research analyst, Maurice Klaehne highlighted, "Apple was the top smartwatch brand last year. With the Apple Watch Series 4 the company further strengthens its position as a preferred smartwatch brand for a consumer's next purchase. 75% of potential Apple Watch buyers said they will choose a Series 4 watch in the next six months."

Mr. Naiya further added, "According to the findings, Apple has successfully established itself as a fashion brand. Six out of ten respondents cited design as a key reason for choosing an Apple Watch; however, consumers are not very decisive on the color preference so far."

"The Apple Store is the top preferred channel for Apple Watch purchases followed by Amazon and Best Buy. This is likely driven by iPhone power users opting for the familiar Apple Store," says San Diego based research director, Jeff Fieldhack. He goes on to state that "However, we believe actual purchases will likely vary due to many factors including existing offers, availability of variants, and customer convenience."


Other Takeaways:
The top three brands (Apple, Samsung, Fitbit) captured 80% of the potential consumer interest as the preferred brands for a consumer's next purchase. LG, Garmin, and Fossil had single digit percentage share.
The high price point and the requirement to own an iPhone are the two biggest barriers that limit purchase decisions for the new Apple Watch.
Health and fitness tracking and quick access to notification are the two main use cases for smartwatches as of now. However, use cases like listening to music and the ability to leave your phone behind are pushing smartwatches towards creating a standalone device category.