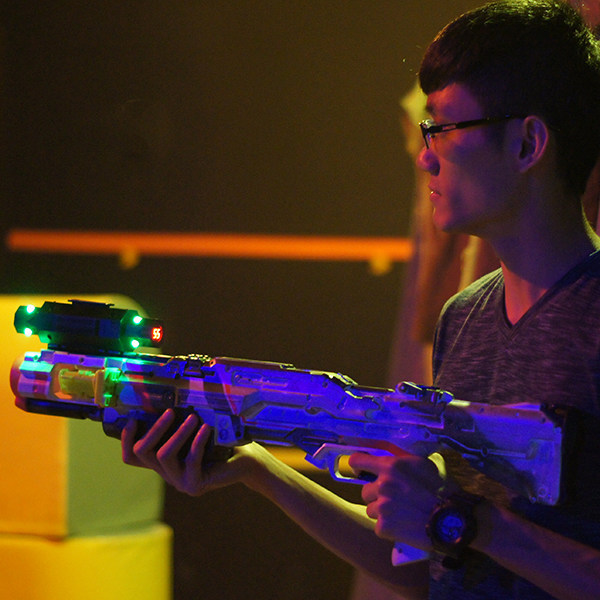 TAG TEAM today introduced Laser TAGRider, a first-of-its-kind gaming accessory that easily mounts onto any toy blaster to repurpose it for real-world laser tag and/or compatible PC/Mac and iOS mobile games. Featuring Artificial Intelligence (A.I.) that learns and understands the loading and triggering mechanisms of the blaster it is mounted on, Laser TAGRider ensures the ultimate in playability. A Kickstarter campaignlaunches today with a funding goal of $10,000 USD, and features limited Early Bird specials at $34 USD as well as several other rewards for backers to choose from - including delivery by Christmas 2018 for backers worldwide.

Laser TAGRider, which works with both battery-operated and pull/slide loaded toy blasters, does not require WiFi to play laser tag - it incorporates built-in sensors that show users when they get "hit," recording damages right on the device. For players, this means there is no longer the need to purchase additional gear such as helmets and target vests to record game activities and scores.

It also means that laser tag games using Laser TAGRider can include an unlimited number of players. And, when using Laser TAGRider to play laser tag, players can access three fun game modes: a) Basic (two modes), Professional (2 modes) and Team. In Professional and Team games, Laser TAGRider allows players to select different gun functionality, including semi-automatic handguns or rifles, a machine gun, a shotgun, and more. Each gun features different aspects that allow players to heighten their gameplay.

For more information about all TAG TEAM games, visit https://www.tagteaminc.sg/toys.

"Whether playing laser tag outside in the 'real world' or battling enemies on your computer screen, TAGRider delivers a unique gaming experience by adding functionality to blasters and toy guns you already have," said Tony Tan, founder, TAG TEAM. "TAGRider delivers a wide range of play options and games, while challenging players of all skill levels to take their best shot!"