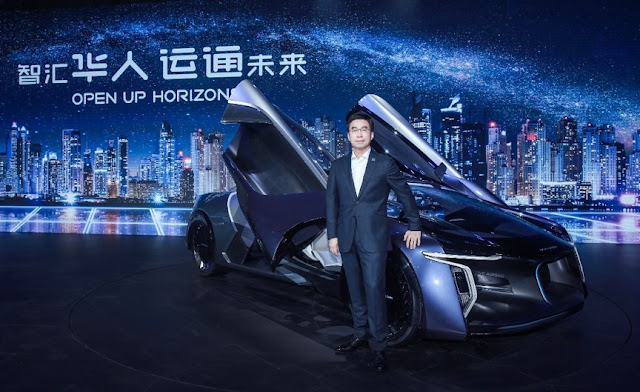 HUMAN HORIZONS, one of a number of fast growing Electric Vehicle (EV)startups in China, made its debut on October 22nd, in Shanghai, the most vigorous economic center of China.

To realize the goal of the "3-Smart" Strategy, HUMAN HORIZONS claims that they will focus on 5 core business fields, including (1) all-new smart vehicle development and manufacturing, (2) vehicle, charging network and energy resource sharing, (3) Internet of Vehicles (IOV) and advanced open-platform autonomous driving, (4) smart transportation applications and (5) smart city development. The digital service operation platform - Digital House - will support all the business areas of HUMAN HORIZONS in the development of the smart city.

Human Oriented Architecture (HOA) is a new digital information platform, which will enable smart cars to act as mobile sensors and data sources, not only serving the vehicle users but also contributing to improving efficiency of transportation management and city operation.

By adopting a usage scenario based approach, the Human Oriented Design (HOD) philosophy will begin from the user's inner world. HUMAN HORIZONS hopes their users will be deeply touched by using their products and services, which will elevate the customer experience from aesthetic enjoyment to emotional engagement.

The Human Oriented Vehicle (HOV) is a smart information structure based on which the smart vehicles will become mobile sensors and sources of information. This architecture will enable improved services for drivers and allow vehicles to provide real time information to transportation and other city services.

Based on such creative ideas, HUMAN HORIZONS has developed 2 concept cars, Concept H Hypervelocity and Concept A Active-agility, which were also revealed on October 22nd. The two concept cars demonstrate and embody HUMAN HURIZONS' creativity and intelligent transportation solutions.

The Concept H Hypervelocity is created around an innovative, adrenaline stimulating 3-seater layout that enhances its aerodynamic efficiency, on road performance and range. One of its amazing features is the "RE.C.E.S.S." ("Re-Configurable Cockpit Electric Steering System), which uses drive-by-wire technology, to enable its steering wheel to be moved to any of the three seating positions, allowing any one of the three occupants to drive.

The Concept A Active-agility presents a concept based upon a passenger capsule that can be connected to different sub-systems at the top or the bottom to provide different modes of transportation. Its POD (Personification-On-Demand) system provides an intelligent and efficient solution for people to move around and keep connected.

HUMAN HORIZONS is also developing in China its own intelligent autonomous driving system with integrated vehicle-road applications. The demonstration car is equipped with multiple sensors; millimeter-wave radar, supersonic radar and lidar and has been tested for more than 100,000 km in closed areas.

HUMAN HORIZONS has started the world's first "Open Road Test Project for Sensory Integration Computational Coordination" - the "Smart Road" Project in Yancheng China. In this project, HUMAN HORIZONS has commenced setup of the related traffic testing and demonstration environment. The roads on the map and cars on these roads will become the first open-type experimental environment for HOA in China. As an initial trial of computational coordination, HUMAN HORIZONS will proceed with the practical application of multidimensional sensory integration and wide area distributed smart computing.

HUMAN HORIZONS is also planning China's first demonstration project for "Vehicle-Road-City Heterogeneous Data AI Restructure", which is to be operated at Lin'gang Intelligent Future Park in Shanghai. HUMAN HORIZONS has already begun the construction of this smart city demo project, for which they will be implementing high-speed heterogeneous data sharing together with multidimensional sensory integration, thus moving from stand-alone intelligence towards fully integrated system-wide intelligence.

Unlike many other startups in China who are rushing to launch their first EV model, HUMAN HORIZONS is getting on track with its strategy to redefine the future of mobility.