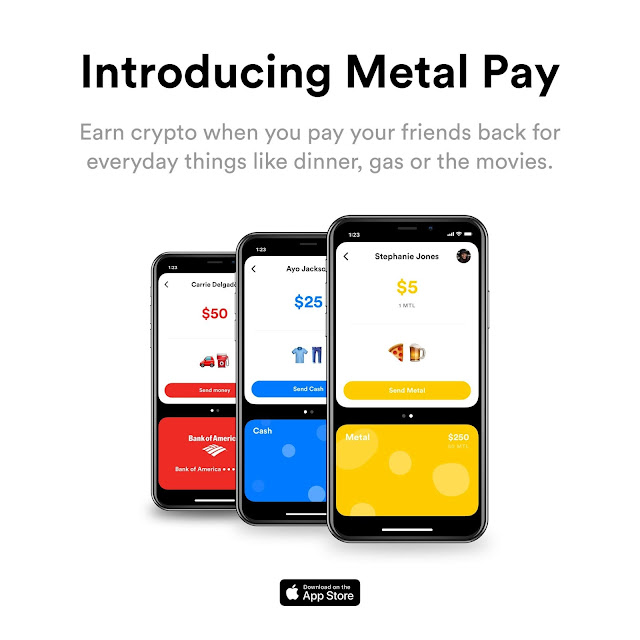 Metallicus Inc., a blockchain-based payment processing platform, today announced the launch of its flagship product Metal Pay. Metal Pay allows people to instantly send money to friends, family and businesses with just a phone number and rewards them with some cryptocurrency for each transaction — think next-generation Venmo or Paypal. These rewards, called "Pop," are delivered in Metal's cryptocurrency MTL and can be immediately converted into dollars, sent to another Metal Pay user or held as an investment. Metal will later link Metal Pay with their equally beautiful micro investing app Crumbs. Crumbs will allow users to turn their spare change into micro investments, like the popular app Acorns, but with cryptocurrency.

On the surface, it might seem like cryptocurrencies have reached the mainstream; after all, it's all anyone can talk about. But in reality, their $200 billion market value is nothing more than a rounding error for big banks. For a true technological payments revolution to take place, cryptocurrency needs to be easy-to-use, easy-to-earn and rewarding for everyday consumers. With Metal Pay, Metal has built just that: a simplified payment system — similar to Venmo — that not only builds on the revolutionary ideas behind Bitcoin, but also rewards the people who use and grow the platform with monetary incentives.

"The millennial generation was largely powered and built the internet, and yet only a handful of people — some worth tens of billions of dollars alone — benefited, while the majority are facing the scariest financial future of any generation in modern U.S. history," said Marshall Hayner, Metal co-founder and CEO. "Our generation coming into adulthood right now has the biggest opportunity of the past 100 years and they don't even know it yet. Together, we can create a world where money works for us, where we don't work for money — that's the vision."


Here's how it works:
Sign up is incredibly simple: just link a bank account to the app, quickly verify identity and phone number, and then begin sending money to people. Payments typically decline or accept in under one minute.
Begin earning MTL for every dollar sent or received, for up to five percent of the value of the transactions — just for doing the things people do every day, like shopping, paying rent or getting dinner with friends.
There is a game-like element to Metal Pay, where the amount earned is determined by how well someone plays the game. The rules are based on rewarding good financial behavior: the more someone saves, for example, the more they can earn; the more fiscally responsible they are, the more they can earn.
Metal Pay is the first cryptocurrency platform that combines traditional bank accounts and a cryptocurrency wallet into one application. The account will eventually have retail banking features such as a debit card and the ability to link credit cards.