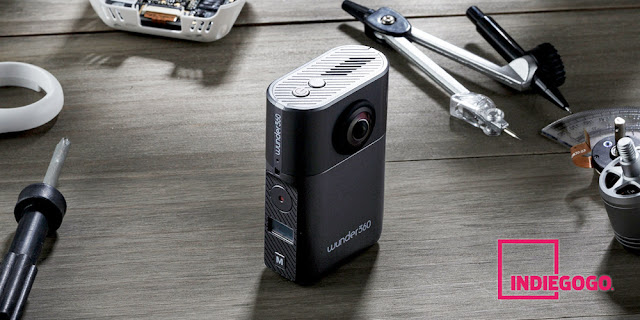 After being successfully funded in 30 minutes on 3rd July, the Wunder360 S1 is now more than 2100% funded with 4000+ backers. The Wunder360 team just unlocked the fourth stretch goal with the funding number reaching $400,000 in less than a month.

With the AI capability in mind during the product design process, Wunder360 S1 is also the only consumer-oriented compact camera offering consumers the ability to create 3D models from their 360 footages captured by the camera. The 3D models generated by the Wunder360 cloud service is available for online sharing and to be imported into mainstream 3D editing professional software. According to the product team, the cloud service generates high enough quality 3D point cloud and creates a 3D model from it. The models can also be imported into Minecraft or viewed in VR/AR headsets like HoloLens. For enthusiasts and professionals in certain areas, Wunder360 team created a tool for them to convert the models into virtual tours which could be viewed through web and mobile phones.

Thanks to the built-in high-performance DSPs and Deep Learning algorithms, the Wunder360 S1 delivers a bunch of intelligent editing functions for flat video lovers alongside the 360-degree and 3D features.
AI Smart Tracking: a well-built AI framework that automatically keeps the main subject in the center of the frames
Intelligent EIS: cinematic level EIS (Electronic Image Stabilization) creating stabilized and smooth videos from original footages.
Smart auto editing: the algorithm recognizes the POIs (points of interest) and automatically creates a short video for users.
Phantom Clipper: the Phantom Clipper feature captures the movements of the main subjects and automatically creates multiple copies of the subject in the videos.

Wunder360 S1 is also a very competitive action camera at a $135 price tag featuring:
Up to 4k resolution photos and 3k 30fps/1080p 60fps videos capturing
Custom-designed waterproof case that comes free with the device providing IP68 100ft waterproof protection
Less than 100g weight
Standard 1/4-inch socket on both the camera and waterproof case
video live streaming in 360 from the device

As the campaign is extended for another month, it is truly a great opportunity to grab this rich-featured compact AI camera at an early-bird price. Visit the campaign page at: https://www.indiegogo.com/projects/wunder360-s1-first-3d-scanning-360-ai-camera-vr-adventure/?utm_source=ereleases