With Refreshed Styling, New Sport Trim and Standard Honda Sensing, Honda Keeps Its Foot to the Floor by Introducing the 2019 Civic Sedan and Coupe 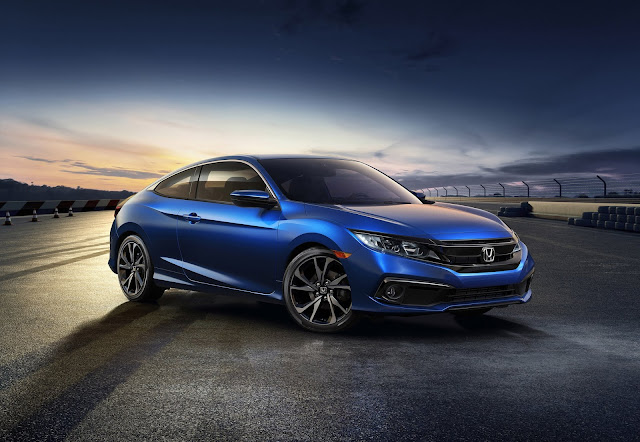 Building on the highly acclaimed 10th-generation Civic lineup and offering customers more of what they love about the model, the refreshed 2019 Honda Civic Sedan and Coupe include updated styling, a new Sport trim for both body styles and standard Honda Sensing® technology on all trims.

The updated Civic Sedan and Coupe are the latest salvos in the 10th-generation Civic's aggressive launch cadence that has averaged a new variant every four months over the past three years since the Civic Sedan launched in the fall of 2015.[1] Civic is targeting its third consecutive year as America's #1 retail-selling car and its 8th straight year as America's #1 retail-selling compact car[2], as well as being the most popular car in America with under-35-year-olds for eight of the past nine years.

The 10th-gen Civic's aggressive and sporty design is one of the most liked attributes among Civic buyers[3] and the Civic Coupe was the top ranked vehicle of its body type in the J.D. Power's 2017 APEAL study among compact cars. The 2019 Sedan and Coupe turn it up a notch with evolutionary styling updates, front and rear. Changes at the front further accentuate the model's low and wide athletic stance and sporty good looks with a new piano black upper fascia "wing," restyled lower fascia, bumper and lower grille, a full-width front splitter, chrome side pod accents, and updated halogen or LED headlights. A chrome accent on the lower rear bumper of the Sedan and new wheel designs for both models – including larger 18-inch rims on the Touring trim – round out the exterior styling updates on the returning trims.

First introduced in the fall of 2015 in Sedan and later Coupe form, the 10th-generation Civic lineup includes the European-inspired Hatchback, the performance-focused Civic Si Coupe and Si Sedan and the world's fastest front-wheel-drive car, the Civic Type R. Cumulative sales of the 10th-generation Civic will surpass 1 million units this year. Since its introduction, the 10th-generation Civic has amassed dozens of major industry awards and accolades including the 2016 North American Car of the Year award, 2017 Kelley Blue Book Overall Best Buy of the Year, 2018 Car and Driver10Best and 2018 AUTOMOBILE All-Stars award. All Civic Sedan and Coupe models sold in the U.S. are produced at Honda's plants in Greensburg, Indiana and Alliston, Ontario. The Civic's 1.5-liter VTEC® Turbo and 2.0-liter VTEC® engines are produced in Anna, Ohio and Alliston, Ontario.