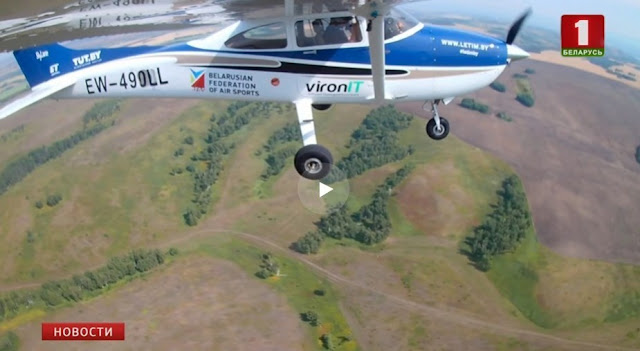 Saturday, August 18, 2018 — Alexander Tsenter, the founder and owner of A-100 group of companies, and Andrey Borisevich, the head of SkyEagle Aviation Academy (USA), had kicked off the first Belarusian round-the-world flight on the tiny Cessna182T plane.

This flight includes several areas of extreme weather and terrain, 10 countries and more than 40 takeoffs and landings. Traveling across the Atlantic, Alaskaand Chukotka in a light single-engine plane is a huge risk with stringent requirements on the aircraft and the crew. But the pilots have been brave enough to combine the two and believe they could fly around the earth.

As reported by National State Television and Radio Company of the Republic of Belarus, the crew of the aircraft has already passed one-third of the way setting a personal record for a non-stop flight on a single-engine aircraft spending 7 hours and 24 minutes in the air. The pilots have already crossed the Bering Strait and now are flying over Alaska. This milestone involves not only changing the geographical position but also timezones in a peculiar way: returning to the past.

The project was supported by well-known Belarusian companies like TUT.BY media, Avia A-100, the Belarusian Federation of Air Sports and the software development company VironIT.