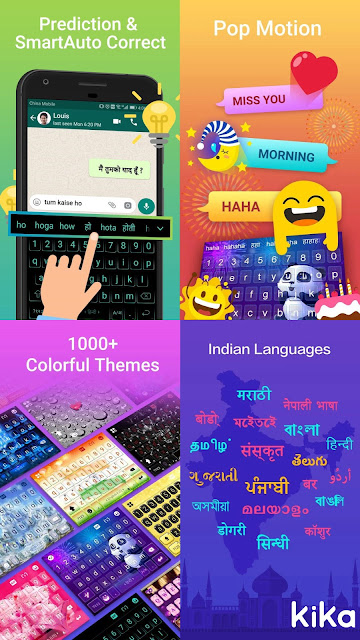 Kika Tech, who revolutionizes communications with AI, today introduced a full-function Indian Keyboard for Android devices. There are more than one billion Indians who do not speak English and primarily communicate in their own native language. Kika's Indian Keyboard bridges the linguistic digital divide in the country, empowering users with communication tools to bridge that gap.

More Indian users will become familiar with Kika as the company is about to enter the Indian market as the preloaded default keyboard through partnerships with major branded smartphones including Huawei, Samsung, Xiaomi, VIVO, OPPO, Lenovo, Meizu, etc. India represents a massive and growing smartphone market. According to International Data Corporation's (IDC) Quarterly Mobile Phone Tracker, which recently published on August 13, 2018, India's smartphone market will continue to grow in the low double digits and will be the fastest growing large smartphone market in the next few years. Smartphone companies shipped a total of 33.5 million units to India during the second quarter of 2018 (2Q18), resulting in a healthy 20% year-over-year (YoY) growth. [1]

"Kika is dedicated to make all smartphones enabled with Indian languages," said Bill Hu, CEO, Kika Tech. "The biggest obstacle in the Indian Smartphone market has always been insufficient support of local languages. With India's 22 official languages and hundreds of unofficial ones, we are excited that Kika can be part of India's mobile revolution and help people connect in their native languages and in a more efficient and easy way."

Text prediction and smart autocorrect - Gives text predictions and autocorrection in Hindi and Bengali and provides ease of switch from local characters to latin letters.

The Kika Indian Keyboard is available now and free to download at: http://bit.ly/KikaIndianKeyboard

Kika addresses all three purposes of human communications: sharing information; sending requests and having it fulfilled; and expressing emotional feelings. Kika is well-positioned and has proven itself a leader in the AI space by leveraging three necessary factors to make it a true and sustainable AI company, including a large global volume of training data, AI technology, and compelling use cases. Incorporating image and voice recognition, Natural Language Processing (NLP) and Deep Learning, Kika Tech's vision is for individuals to connect much more efficiently, engaging in meaningful conversations.