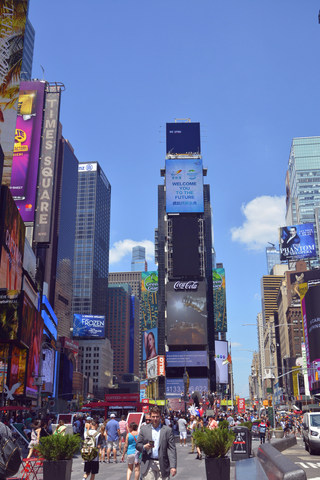 Times Square is located in the heart of Manhattan, New York City, as a world-class financial center and tourist attraction, at an annual passenger traffic of nearly 100 million passengers, as well as attracting 500,000 tourists and local residents from all over the world every day.

In August 2016, Country Garden, one of the World Top 500 companies, officially announced its development strategy of "City-Industry Integration", aiming to create an industry-centric, project-based, livable and enterprise-adaptable city, which integrates production facilities, life environment, and ecological system as a whole, by promoting mutual development through interaction between city and industry.

As the first demonstrative project for Country Garden's strategic planning, Country Garden Sci-Tech Town is only a characteristic town named with "Sci-Tech" by the Guangdong Provincial Development and Reform Commission, and has been selected into the first batch of characteristic towns in Guangdong Province. The town is committed to achieving a full range of smart city goals, creating 5S smart interconnected towns that interconnect industries, smart facilities, scenes, ecosystems, and traffic transportation, establishing the links of things, interaction between things and human, as well as interconnection of all things, thereby providing a package of quality services for the Internet of Things (IoT) industry with the IoT platform and Big Data platform, payment platform and Internet platform, and providing socialized management and services for cities.

At present, Country Garden Sci-Tech Town works with Shenzhen Association of Internet of Things, as well as other scientific research institutions and industry associations in soliciting users and lessees. The initial area has been leased out fully and it is expected that, at the time of opening in September 2018, Country Garden Sci-Tech Town will gather a number of Internet of Things technology companies and innovative carriers, such as YITOA, FARAD ELECTRIC (R&D Center and Academician Workstation), Keruyun (Hardware R&D and Manufacturing Base), Harbin Institute of Technology, MOST Mass Entrepreneurship Zone, the Intellectual Property Service Center of Chinese Academy of Sciences, etc.; they will develop together with Country Garden to create the IoT ecosystem and smart technology lifestyle town.

"Environment is regarded as one of the critical factors in the success of Silicon Valley. In the past, I always believed that environment was an uncontrollable factor, but after making deep understanding of Country Garden, I changed my views and the environment could be created," Kai-Fu Lee said, the founder of the Sinovation Ventures. The Sinovation Ventures is capable of providing technical and talent resources, while Country Garden will develop a high-quality environment that is conducive to work and life.