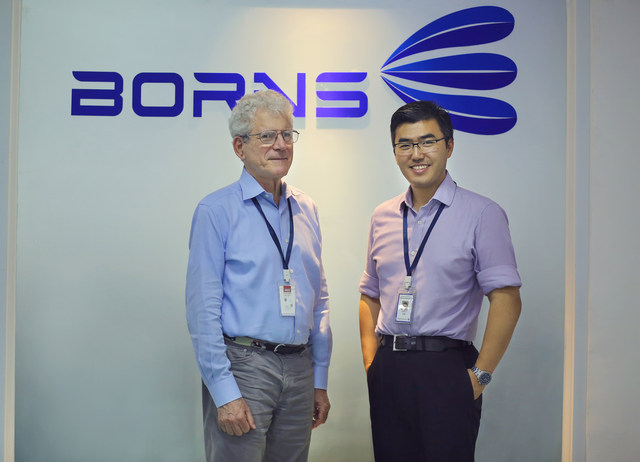 Tianfu Software Park is one of the largest tech parks in China, we selected a batch of excellent enterprises which grown up in the park, and visited their founders or CEOs. The face-to-face communication allowed them to learn more about the latest thoughts, analyses and outlooks of the enterprises about science and technology in China. We hope this will bring inspiration to people who hope to enter the industry.

Tianfu Software Park excellent enterprise: Borns Medical Robotics Inc (also refer as "Borns") was founded by Dr. Yao Liwho is a scientist at Stanford AI Lab, Stanford Robotics Lab. The China headquarters is located in Tianfu Software Park of the Chengdu High-tech Zone and Bio-Town, while the US R&D center is located in Silicon Valley. Borns mainly focuses on the application of AI medicine and is dedicated to advancing minimally invasive surgical robotics and their clinical application. The Borns team is made up of experienced roboticists and scientists from the biomedical engineering field, including the co-founder and CTO, IEEE Life Fellow, Dr. William Levine.

Dr. Yao Li received his Ph.D. in Electrical and Computer Engineering from the University of Maryland, College Park. He has worked as a postdoctoral research associate in biomedical engineering at the University of Southern California. Currently he is a research scientist at the Robotics Lab of the Artificial Intelligence Laboratory at Stanford University. He is also a member of the Robotics and Laparoscopic Surgery Committee of the Chinese Society of Research Hospitals, and has had a long engagement in medical robotics and artificial intelligence medical research. He has his own unique view on the current situation and development trends of AI-Powered Minimally Invasive Surgery in China.

Regarding the biggest change in medicine in recent years, Dr. Li believes it is the "technology empowerment", especially in high-end medical devices and medical services. In 2015, "Internet Plus" was initiated as a national strategy in China. This opened a new platform for business for innovative medical devices, innovative medical services, and intelligent wearable devices. The rise of artificial intelligence (AI) allows technology to empower the medical industry: medical image analysis, machine reading and intelligent diagnosis, all of which can deliver much more accurate results than an average doctor.

Dr. Li explained that AI integrates data sciences, optimization theories, and automation technologies, to solve problems in learning through super computation. Its application to health care has just begun. Due to lack of knowledge of the disease mechanisms, the current diagnosis methods are sometimes biased and treatment methods are sometimes inaccurate. AI potentially has a broad application in diagnosis and treatment of diseases and in the improvement of surgical performance and outcomes through automation of surgery.

Currently, quite a few enterprises in China and globally, have started working on the application of AI to medicine. This work can mainly be divided into two categories: one is medical diagnosis systems based on clinical big data and pathology imaging science, such as IBM's Watson and Tencent's Miying (Image Seeking). The second category is medical devices, including sensors collecting front-end signals for data analysis, high-performance AI processors, robotics, and automation systems. Utilizing robotics and data science, Borns has developed new minimally invasive surgical robot with own intellectual property to meet the surgical requirement in China.

Medical robotics includes: surgical robots, diagnosis robots, and rehabilitation robots, etc. Compared with human surgeons, robot can maintain more stable, finer and safer operation for a longer time in complicated surgeries. Through the Internet, surgical robots can also perform remote diagnosis and surgery, which could distribute better treatment to remote areas. According to Grand View Research, surgical robotics owns more than 60% of the market share of medical robots. Surgical robots can be further divided into neurosurgery, orthopedic surgery, laparoscopic surgery and interventional surgery robots, etc. The laparoscopic minimally invasive surgery robots are currently the most popular robot. More than 600,000 robotic surgeries have been successfully carried out in more than 800 hospitals in 33 countries around the world, covering gastrointestinal, hepatobiliary, urology, obstetrics and gynecology, cardiology, and thoracic etc.

When it comes to the medical applications of robots, Dr. Li believes that the automation process will be similar to the development of human apprentices with the development route going from "assistant", to "collaborator," and on to "independence". Initially, the robot will assist doctors to complete basic surgical operations; in the collaboration phase, the human and robot will work together to complete complicated operations, with the doctors mainly taking the role of decision making. Ultimately, robots will independently execute the surgery. Throughout the process, the robot will learn from the surgeons' experience and decision-making guidelines, accurately identify the key clinical goals and implement the corresponding programs. This will be the breakthrough that results in the future in autonomous surgery.

According to BCG Boston Consulting, as of January 2016, the global medical robot industry achieved annual revenue of $7.47 billion, and is expected to grow at a steady compound annual rate of 15.4% over the next five years, given that global medical robot sales are expected to reach $11.4 billion by 2020. With the increasing demand for complex operations and the upgrade of medical infrastructure, more and more hospitals are open for surgical robots. According to Morgan's recent study, American surgeons believe that the use of surgical robots will increase by around 50% in the next 3 to 5 years, a huge market potential.

In view of the global market share of surgical robots, North America is currently the largest market for surgical robotics. With the upgrade of medical systems and increased awareness of minimally invasive surgery, the focus should gradually shift to the Asian market. Medical robotics are an important part of China's industry 4.0 strategy. In the outline of the 13th Five-Year Plan and subsequent guidance documents such as Made in China 2025, the State Council proposes a focus on the development of medical robots and other high-performance diagnostic and treatment equipment, and actively encourages innovation in domestic medical devices. National ministries and local governments have provided policy guidance on the establishment of medical robot testing and application platforms, and set up the standards in the robotics industry. Surgical robotics have become a focus of national development in the future.

As an expert in robotics and artificial intelligence, Dr. Li has been involved in many biomedical sciences researches, using automation as well as signals, systems and control theory to analyze sensorimotor control. He found that the use of advanced AI-control theory is far superior to the traditional methods in terms of control quality, model prediction and safety. We can accelerate the technology in a much broader surgery field by upgrading the robotics system using advanced AI control, which could liberate doctors from heavy labor.

"We wish to help surgeons," said Dr. Li," it is a very hard job, and we hope to use artificial intelligence robotics to improve minimally invasive surgery so that surgeons and patients can all benefit from it."

According to the 2017 Investment Analysis Report on China's Healthcare, the market of China's medical device industry has grown steadily in recent years, with a growth rate of more than 20%, reaching 370 billion yuan as of 2016. Talking about the experience of entrepreneurship in Chengdu, Dr. Li said that the Chengdu biomedical industry has reached a considerable scale.

Based on traditional biopharmaceuticals, Chengdu has begun focusing on innovative medical services and AI medical industries. Dr. Li said that, the AI medical industry, represented by surgical robotics, is on its way to marketization, but the path is not easy. According to the instructions specified in Made in China 2025, Guidance on the Healthy Development of the Pharmaceutical Industry, and other major policies issued by the State Council and National Ministries, this industry will be expected to achieve long-term leap-forward development. If Chengdu seizes this opportunity, and gives its support to the medical robot industry, it is possible to overtake the curve, and take the lead in the country to realize production, marketization and clustering.

Grand View Research is a U.S. based market research and consulting company, registered in the State of California and headquartered in San Francisco. The company provides syndicated research reports, customized research reports, and consulting services. Grand View Research database is used by the world's renowned academic institutions and Fortune 500 companies to understand the global and regional business environment. Our database features thousands of statistics and in-depth analysis on 46 industries in 25 major countries worldwide.