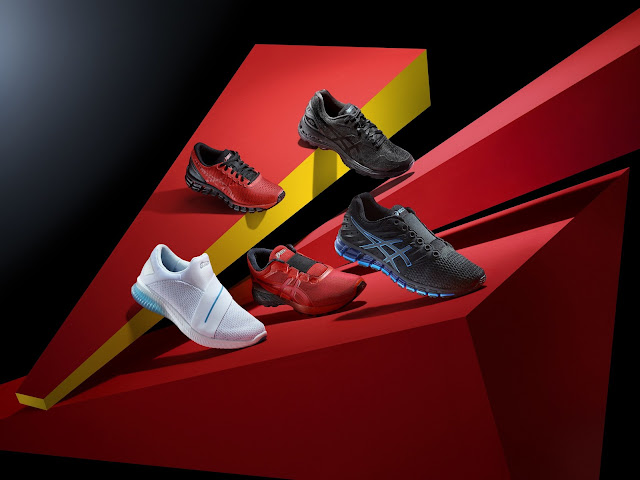 Launching this week, ASICS and Disney are calling on families and friends to channel their inner superpower and move together.

With the highly anticipated release of Disney•Pixar's Incredibles 2 hitting UK cinemas on Friday 13th July, ASICS and Disney have teamed up to create a range of Incredibles inspired activities and products.

Fans will be able to rock the 'Super' look with an exclusive range of five limited edition Disney•Pixar Incredibles 2 x ASICS footwear - inspired by the iconic abilities and styles of each character:

Dedicated to comfort and versatility, the GEL-QUANTUM™ 180 2 shoe is the marriage of strength and street-style. With its staple 180 degrees of GEL protection, the shoe has also been upgraded with a custom Mr. Incredible sock liner.

Blink and you'll miss it. The DYNAFLYTE 2™ shoe is lightweight, fast, and its full length FlyteFoam™ midsole works with the wearer's foot to deliver superior cushioning every step of the way. Drawing inspiration from the powers of the whole Parr family, the shoe features a vibrant character sock liner, reflective Incredibles mask embossed heal and a lace-less design.

A nod to the ultimate costume designer, Edna Mode; GEL-NIMBUS 20™ is the shoe for all the female superheroes out there. With a glitter mesh upper, satin tongue and customised sock liner, it's fitting that this tribute to Edna Mode is the most stylish of the lot.

The GEL-KENUN KNIT™ shoe strikes the balance between style and performance. Inspired by Frozone's very own 'super suit', the GEL-KENUN KNIT™ features an ice blue GEL™ technology heel alongside a sleek and modern knit design. Lightweight, breathable and packed with GEL™ cushioning technology, the shoe will have fans feeling like they're gliding on ice.

Engineered with 360 degrees of GEL™ cushioning technology, the GEL-QUANTUM 360 GS™ kid's shoe version is built to allow you to power through any race. Spring loaded, glitter striped and with a reflective Incredibles mask to boot- you'll have to be fast to catch this Dash inspired shoe.

The Disney•Pixar Incredibles 2 x ASICS footwear collection will be available in all ASICS stores and on ASICS.com from 1stJuly 2018.

Disney's '24-Hour Challenge' is a free, family-friendly challenge that can be done anywhere at any time throughout the summer. In teams, families and friends are encouraged to clock up 24-hours of physical activity between the 3rd June and 9th September 2018.

The challenge features 24 fun, active 'missions', such as the Super Dance Off with Elastigirl, Dash's Daring Dash, and the Incredi-Crawl and has been created for teams of families and friends to complete over the summer; all inspired by the Parr family's superpower skills as featured in the new Disney•Pixar Incredibles 2 film.

As well as moving together and taking on the challenge, participants will also be able to raise money to support UNICEF UK's work with 100 per cent of money pledged through the challenge reaching UNICEF UK to help build a better world for children.

Families and friends can create teams of up to 10 people and set-up their own 24-Hour Challenge page via http://www.24HourChallenge.com.

With today's population the least active in history, ASICS will target thousands of families to inspire them to get active together. This builds on ASICS' recently launched global brand campaign I MOVE ME™, which aims to inspire people to get active and move - regardless of who they are and how they move. It also reflects Disney's Healthy LivingCommitment which seeks to help and inspire the whole family to be happier and healthier by eating better and being more active together.

In "Incredibles 2," Helen (voice of Holly Hunter) is called on to lead a campaign to bring Supers back, while Bob (voice of Craig T. Nelson) navigates the day-to-day heroics of "normal" life at home with Violet (voice of Sarah Vowell), Dash (voice of Huck Milner) and baby Jack-Jack-whose superpowers are about to be discovered. Their mission is derailed, however, when a new villain emerges with a brilliant and dangerous plot that threatens everything. But the Parrs don't shy away from a challenge, especially with Frozone (voice of Samuel L. Jackson) by their side. That's what makes this family so Incredible.

Even Supers sometimes need motivation to achieve their missions, so to help you complete your challenge, you can help raise money to help UNICEF build a better world for children.

You can help provide children with clean water, life-saving food, vaccines, and a safe space to laugh and play so that they grow up happy and healthy.
£10 could provide a month's supply of clean drinking water for 300 children
£24 could give a month's supply of life-saving food for a severely malnourished child
£55 could train a midwife to provide care to keep mum and baby safe and healthy

By joining the challenge, you are already supporting the campaign for children to lead happier, healthier lives. Disney has already donated £100,000 to this campaign as part of an existing global partnership with UNICEF to help build a better world for children.