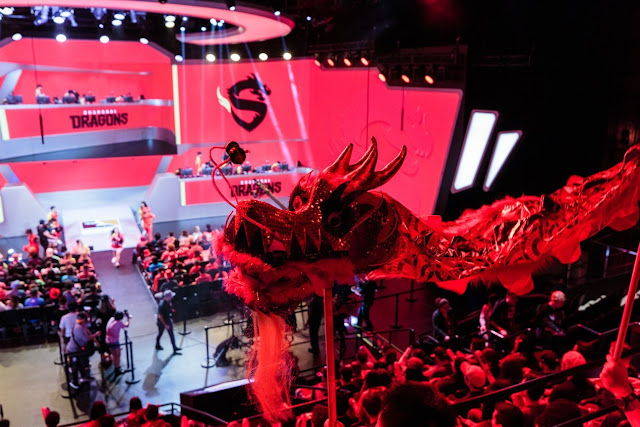 Under the warm California sun, Shanghai Dragons team welcomed enthusiastic fans to the second Team Day event in Burbank for the Dragon's match against Houston Outlaws. Thanks to the last Team Day event, even more fans have fallen in love with this team of sports with a unique charm. Last time, supporters were predominately Chinese fans, but many more local fans showed up to support the Shanghai team this time in Blizzard Arena. For many staff who were working for the event, this was their first time on site for a Dragon's match, and they proudly wore the classic red jerseys as they prepared gifts for the fans. Together, they were ready to paint the Blizzard Arena in red again.

There was an upgrade in the gifts for fans as well. In addition to slogans and body stickers, every fan received a red hat and a red cape, giving the team day kick off a more celebratory atmosphere.

The new roster additions of Shanghai Dragons during the first Team Day have already become familiar faces in the starting lineup. Throughout the arena, huge posters were prepared by loyal fans who were waiting for their favorite players to play.

Bathed in a sea of red, Blizzard Arena was Shanghai Dragon's home arena today. The dancing dragon behind the spectator seats was the best embodiment of Chinese elements to show to global viewers in live streams. Just like the dancing dragon, the Dragon team also put on a spectacular performance today.

The walkouts have been some of the highlight moments in the Overwatch League, with team members trying to impress fans with unique characteristics of the teams, and this was no exception. Today, Freefeel led the dragons into the arena wearing a Dragon mask that attracted the attention of all the fans in the arena. Even the casters praised it as the symbol of the Dragons' strength and their energy in search for a long-sought victory. It is the determination to improve and overcome difficulties in order to bring the fans the best possible experiences.

The energy also stemmed from the fans, whose passion spread to other members of the audience. In particular, the star player Muma of the opposing team, put on a red hat and became a supporter of Dragons on team day.

The loudest cheer went for Fearless and Geguri, who have been kindly nicknamed "big brother" and "frog sister" by the Chinese community. Although they've only been with the team for two months, these two players and other new additions have become key players on the roster. The home court atmosphere was absolutely bringing encouragement and confidence to the players, which translated into excellent plays that demonstrated the strength of the Dragons.

Cute Dragons, made as gifts, from SHD Tigers, a New York Shanghai Dragons fan club, were some of the highlights in the spectator seats. The core members of the fan club Mel, Lemons, May, Li, and Sharon were invited to Blizzard Arena from New York to watch Shanghai Dragons' match on site for the first time on the eve of the first team's day event. The little dragons they made overnight stole the show even from the dancing dragon, as they appeared on the camera with fans cheering on the team with big smiles.

During the halftime break, cheerleaders of Shanghai Dragons performed a professional cheerleading dance for the players and fans. The dance was with such energy and vitality that even some of the players on the stage were caught peeking over the monitors in order to catch a glimpse of the dances' performance.

Diya was the undisputed hero of the red-colored arena today. His mastery of Widowmaker was on full display for three maps in today's matches, earning him the MVP for the series – the first time ever that a losing team's player received this honor. Be it kills or assists, Diya delivered, and he certainly had the upper hand in one on one with his counterpart in Houston Outlaws. His kill streaks on King's Row and Lijiang Tower were some of the best highlights of the game.

Diya is one of the core members of Shanghai Dragons that have been displaying top-tier performances ever since the start of Overwatch League. He has been very consistent in the DPS role and can often win the match up against his counterpart. Him winning MVP wasn't due to the fact that it was Shanghai Dragons' team day - as the casters mentioned on the desk, Diya just had an incredible match today. His accuracy made him the most dangerous players in the game. He led Shanghai Dragons' offense in 3 maps.

The secret guest Jimmy O. Yang visited Shanghai Dragons after the match. Little did they know, that the star actor who appears on TV shows is a Shanghai Dragons fan too. Facing a TV star, players of the team were shy, which was no longer a thing as they interacted with fans every day. As they shook hands with Jimmy, the practice room became a one-of-a-kind fan meet and greet. Ever the comedian, Jimmy decided to lie on the table for the group photo with the Shanghai Dragons. Who knows, he might even mention the Dragons in his future shows.

SHD Tigers provided the Dragons a handmade picture book with Chinese, English, and Korean languages at the autograph session. Every picture in it conveys the passion and encouragement from the fans to the Dragons. This special gift on Children's Day bears the story of every player and the unrelenting support and care for the team. They would like to thank all the fans of Shanghai Dragons. They are trying their best to be the team that make all of the fans proud.

With Overwatch League Inaugural Season coming to an end, the start of Shanghai Dragons and the growth of our incredible fan base have been witnessed. The strength of the Dragons will carry on, as it includes the support from every single one of their fans. The fans are the reason that the Dragons work hard to continuously improve their play. While the Shanghai Dragons' Second Team Event may have come to a close, the Dragons' spirit will live forever at Blizzard Arena and in the players' and fans' hearts.