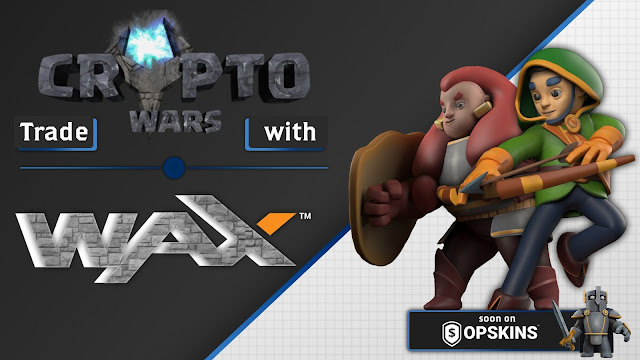 CryptoWars and Worldwide Asset eXchange ™ (WAX) today announced that the company's Crypto Collectibles™ will be available on OPSkins™, the world's leading marketplace for online video game assets, and will be tradable with WAX Tokens, Bitcoin, ETH, US dollars, Euros and dozens of other currencies.

CryptoWars is a fully decentralized strategy game built on the Ethereum blockchain. In CryptoWars, users can build villages, summon armies to protect their e11 tokens and battle enemies to steal their tokens.

"Developing CryptoWars was a huge challenge because the blockchain gaming industry is in such an early stage. This new frontier presents an amazing amount of innovative opportunities for game developers and gamers. Having true ownership of game assets and being able to transfer them from game to game is incredible," said Matías Nisenson, CEO & Co-founder at Experimental, the company behind the fully decentralized strategy game CryptoWars. "It's with great joy that we announce our partnership with WAX to bring to market our limited-edition skins and collectibles that will be compatible with all games developed by Experimental and all game developers using the shared NFT protocol in their games."

"The inception of blockchain-based games and collectibles presents a new opportunity for the crypto community to get involved, and game developers are taking notice," said Malcolm CasSelle, CIO of OPSkins and President of WAX. "As the popularity of blockchain games and Crypto Collectibles grows, so does the need for a trustworthy marketplace, which is where WAX and OPSkins come in. The integration of CryptoWars into this ecosystem is an exciting move for us and for the blockchain-based gaming community as a whole."


With the integration of CryptoWars onto the OPSkins platform, WAX Tokens gain additional utility and more players are incentivized to join the ecosystem.

OPSkins is rapidly becoming the go-to marketplace to trade Crypto Collectibles, also known as non-fungible tokens or NFTs. CryptoWars is the latest game using NFTs to be added to OPSkins and whose in-game virtual assets are tradable with WAX Tokens. The first NFT was CryptoKitties in December 2017, and there are more to come. OPSkins boasts over two million weekly transactions on its platform, has millions of active customers, adds 200,000 new users each month and offers over five million items available for purchase using WAX. WAX allows anyone to create a virtual goods marketplace, onboarding millions of gamers to the growing cryptocurrency space.