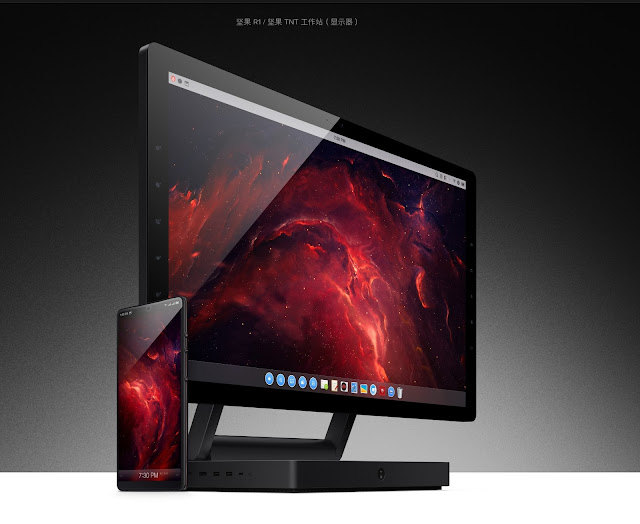 Smartisan held a product launch for its latest release at the Bird's Nest Stadium in Beijing, a long-awaited, revolutionary device: the TNT Work Station, along with the R1 phone.

Smartisan is now in its sixth year, and the TNT Work Station is based on Smartisan OS's large screen work center, using an innovative "touch and talk" (TNT) interaction style. By changing the underlying logic of how users interact with a computer with both gesture and voice input, it creates a more natural, more intuitive approach to interaction. It redefines human-machine interaction, making for a "smarter" experience and decreasing the demands on the user. It recreates the most important productivity tools, and by pairing with the R1 phone it allows users to flow between devices, enhancing efficiency for work, messaging, search, and input. It is a revolutionary new engine for productivity.

The TNT Work Station supports system-wide voice input and control. At any point, a user only need tap one button, and they can input text by voice or issue commands. It's a more intuitive and much more efficient interaction experience. And with the Smartisan Office document, spreadsheet, and slide presentation apps, combined with touch and talk interactions and AI algorithms, all of the repetitive little office software tasks and actions, like editing slides, become instantly easier. For instance, the system's AI can provide format recommendations, predict what images you might want and find them automatically, convert notes into full slides, and, through the ten buttons of the Smart Sidebar, offer easy shortcuts for text, images, and files, all to make your work more truly productive.

The TNT Work Station also offers "Bullet Messaging" to allow for easy, one-off messaging with 10+ contacts. It supports combined, full platform search with one-time input, and storage is shared with the R1 phone so you never need to sync. The capacitive touchscreen supports gestures using up to all ten fingers for an unprecedented level of control.

The TNT Work Station provides a full array of richly optimized system apps, including Smartisan Office, messaging, Big Bang, and Idea Pills, not to mention Smartisan Notes, Gallery, Calendar, Mail, File Manager, Browser, and more, all for large screen display. This ecosystem will be built out in the future to work with handheld gaming devices and 4Kscreens, letting users experience a new style of work and play.

The R1 phone, meanwhile, is the "core" of the TNT Work Station. Dubbed a "next generation flagship phone, with the computer of the future inside," it has powerful performance and processing speed, a flagship caliber camera, and stunning industrial design. R1 is equipped with a Snapdragon 845 processor, 6GB of memory (up to 8GB), and up to 1TB of storage. Its Antutu benchmark score stands at 275,000. It supports TV OUT large screen gameplay, has dual 12 MP and 20 MP cameras on the back, a 24 MP camera on the front, and Sony's IMX363 sensor with OIS and 4K video EIS, yielding exceptional, first-rate camera and video performance under all kinds of conditions. The system also has newly added touch sensitivity shortcuts, full upgrades to the three key productivity tools (Idea Pills, Big Bang, and One Step), AI enhancements throughout, along with support for multi-key phone cases that improve the phone's usability. In terms of industrial design, it uses a 6.17" 18.7:9 wide color gamut screen, with 1500:1 contrast ratio, support for touch sensitivity, and a screen ratio of up to 84%. It continues Smartisan's tradition of minimalist design, with discreet touches like the integration of the logo within the fingerprint sensor, and a cambered 3D glass back, making for yet another breakthrough in visual and tactile design.

R1 has all of the specs that a flagship phone should: fingerprint and face recognition unlocking, with linear motor haptic feedback; 3600 mAh battery with 18W fast charging and 10W wireless charging; an immersive sound system for stereo sound with music, movies, and gaming; hardware-level AI noise reduction for effortlessly eliminating ambient noise in calls; support for dual 4G dual VoLTE, and two SIM cards with simultaneous standby; and support for NFC, USB 3.0, and more. R1 is everything a flagship phone should be.

May 15 was not only the date of Smartisan's latest product launch at the Bird's Nest, it was also the company's sixth birthday. It was on this day six years ago that Smartisan released its first disruptive product, spelling something new not just for Smartisan, but for the whole industry.

Through the last six years of exploration and development, Smartisan has matured, succeeding in product quality and innovation, product line diversification, the buildout of its team, integration of its sales channels, and the expansion of the user experience. And it is using its accelerated growth to evolve. In the smartphone industry, Smartisan has always made the effort to raise the bar for industrial design and user-centered interaction. Even in the toughest moments, it has stayed committed to this, and in a time when smartphones are becoming more homogenized, it has held to a differentiated product strategy so as to better satisfy the needs of users. That is what is behind Smartisan's artisanship, and its courage to explore and innovate.

Within that is Smartisan OS, the most distinctive smartphone OS around, dedicated to enhancing the efficiency of interaction with mobile devices. Throughout the last six years, Smartisan Notes, Big Bang, One Step, Idea Pills, and other productivity enhancements have been hugely popular with users. But mobile devices are only part of it, and when needing to work at a desk, the model is still rooted in the last century. This is why Smartisan OS has adopted an all new interaction model, to challenge the status quo of larger screen devices. TNT Work Station is an important breakthrough, and one of Smartisan's most disruptive products of 2018.

This history of human-computer interaction has been one of turning from humans adapting to computers, to computers being adapted to humans. And that has taken us through stages centered around manual input, command languages, graphical user interfaces, voice commands, up to multi-channel and multimedia smart interactions. TNT Work Station is based on Smartisan OS's large-screen launcher center, using an innovative "touch and talk" interaction model of both gestures and voice input and command to allow for more truly human interactivity. It redefines human-computer interaction, improving the experience while reducing the burden on the user.

Addressing the current pain points in office software, the TNT Work Station is designed with a "Crystal Ball" feature that is able predict the next likeliest operation based on what a user has already done, and then provide solutions. Crystal Ball can, for instance, recommend photo filters based on an image, make preliminary photo touchups, or anticipate content based on what's already been input into a table.

TNT Work Station also is based on a 4K large screen, providing an all new experience for search and communication. On a practical level, Smartisan also expended incredible effort to redesign and improve the productivity of office, communication, search, and input apps.

On that foundation of high productivity, TNT Work Station will be introducing even more features in the future, fitting even more mainstream office production tools, like image editing, audio editing, and more. Outside of work, TNT Work Station also promises users a better entertainment experience, including the ability to port mobile games like Honor of Kings or PUBG to a large 4K screen, giving users an even more thrilling 3D experience.

Following the first generation of smartphones, with already ten years of development, the industry has entered a phase of extreme homogeneity. Over just a few years, smartphones have gone through countless iterations, including in performance, screen size and aesthetics, software interactions, and so on. But there has been no real breakthrough. In 2018, the hardware in smartphones is already fully mature, as with R1's Snapdragon 845 processor for powerful performance, 8GB memory for faster processing, and 12 MP and 20 MP dual cameras for better photos. But apart from all that, what else can a smartphone do? With that question, Smartisan made R1 the "next generation phone with the computer of the future inside."

The "next generation" flagship phone is made for the next era, and expands the possibilities of what a flagship phone can do. This is where R1's value lies.

First, it breaks through the limitations of the small screen and redefines the next generation for smartphones. R1's screen is more evolved, allowing for an experience nearer to that of desktop work. With Smartisan OS's large screen version built in, when you connect to the TNT Work Station the phone's launcher screen instantly transforms and becomes dramatically more efficient

Second, it breaks through the limitations of storage. R1 adopts Smartisan's unique Dual UFS patented technology to expand onboard storage up to 1TB. That means more space for your files, and more ways that your phone can be used. At the same time, R1 is the "core" of the TNT Work Station, achieving a system that operates smoothly in both large and small formats, removing the need to sync, and realizing true seamless storage across devices.

R1 is Smartisan's 2018 heavyweight flagship device, a significant new step among flagship product lines following from ceaseless innovation, and it will point the way for future smartphone development.

In a time of increasingly fast iteration of consumer digital products, Smartisan has brought the revolutionary TNT Work Station and R1 to completion after starting development on them just last year. They mark a significant point in the evolution of smart products, and, after six years, a major breakthrough in Smartisan's own growth.