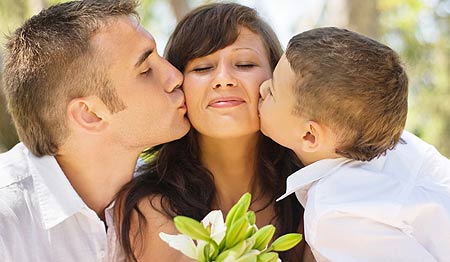 Mother's Day is an annual celebration designed to recognize the important contribution that mothers make to their families and society as a whole.

So here are some facts about this holiday honoring those that play such a huge role in each of our life.

The first Mother's Day celebrations originated in the spring celebrations of ancient Greece in honor of Rhea, the Mother of the Gods.

During the 1600s, England celebrated a day called Mothering Sunday, celebrated on the fourth Sunday of Lent. This is a time put aside for rest and pleasure throughout the long Lenten fast. Servants would go home to see their families, bring cakes and sweets to their moms. This custom has been called going-a-mothering. Every mother would receive a simnel cake and she would give blessings to her children. Other lore relates that hundreds of years ago it was considered essential for individuals' return to their home or their mother church once a year. Therefore, every year during Lent, people would visit their mother church, usually main church or Cathedral of the region.

Mother's Day in the United States was mainly recognized by women's peace groups. An early activity was the meeting of groups of mothers whose sons had served or died on either side of the American Civil War. There were local celebrations in the 1870s and the 1880s but absolutely nothing to speak of on a state or a national basis. In 1868 Ann Jarvis created a committee to establish Mother's Friendship Day whose goal was to reunite the families that had been split throughout the Civil War and she wanted to expand it in an annual memorial for mothers but she died in 1905 before the celebration became well-known. Later her daughter Anna Jarvis continued her efforts. Julia Howe, who'd written The Battle Hymn of the Republic, organized a Mother's Day antiwar observance in NY City on June 2, 1872. The observance continued in Boston for about 10 years under Howe's personal sponsorship before losing momentum.

The interesting trivia and facts of Mother's Day is thought-provoking. 123Greetings.com has been celebrating the Mother's Day with you all for over two decades now. Last year 437,984 ecards were sent globally at 123Greetings.com and over the years we are seeing a considerable rise in the number of sends and shares. We have over 1300 ecards across 13 categories.

Arvind Kajaria, Founder of 123Greetings.com, says, "Mother's Day is a day to express and be glad for the one who gave us a major chunk of her life and soul. 123Greetings.com has some of the choicest ecards to share your joy with your mom. Know that what truly makes your mother happy is your time, regard, concern and attention."

123Greetings.com is the world's leading online destination for human expressions reaching 95 million visitors annually. Its offering of over 42,000 ecards across multiple languages covers a mix of 3,000 seasonal & everyday categories. Its presence is ubiquitous with its Mobile App, Mobile Website and Facebook App catering to users on mobile and social media respectively. Its Connect feature is a relationship management tool enabling users to actively manage their expressions to both personal and professional contacts. It also operates 123Greetings Studio, a unique platform for artists, to upload and monetize their own ecards.