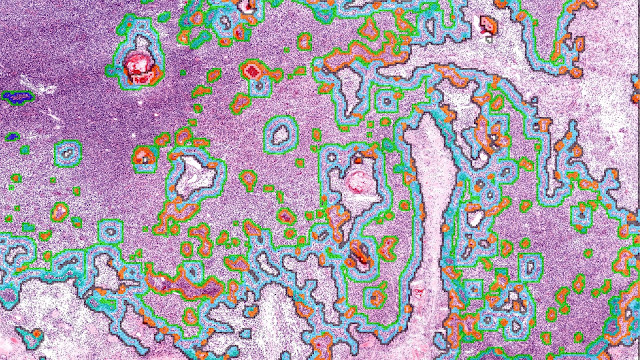 This year alone, an estimated 13,000 Americans will be diagnosed with glioblastoma, which is the most deadly and aggressive form of brain cancer. In the ongoing pursuit of new therapies, a growing number of researchers studying the disease are using the Ivy Glioblastoma Atlas Project (Ivy GAP): a publicly available anatomic transcriptional atlas of human glioblastoma. A report on the Ivy GAP and the associated Ivy GAP Clinical and Genomic Database published this week in the journal Science.

"Our mission at the Allen Institute for Brain Science is to accelerate the understanding of how the human brain works in health and disease," said Mike Hawrylycz, Ph.D. "The Ivy GAP gives researchers around the world a foundational resource for exploring the anatomic and genetic basis of glioblastoma at the cellular and molecular levels."


Led by researchers at the Allen Institute for Brain Science and Swedish Neuroscience Institute, and funded with grants from The Ben and Catherine Ivy Foundation, Ivy GAP includes detailed information about genes expressed in the many anatomical regions of glioblastoma.

"The Ivy Glioblastoma Project allows investigators to access massive amounts of tumor genomic information and patient clinical information," says Charles Cobbs, M.D., the Gregory Foltz, M.D., endowed director of The Ben and Catherine Ivy Center for Advanced Brain Tumor Treatment at the Swedish Neuroscience Institute. "The new knowledge resulting from universal access to the atlas is leading to advances in our understanding of the biology of glioblastoma."


The goal of Ivy GAP is to provide online resources to scientists and physicians dedicated to the development of innovative treatments and diagnostics that will enhance the quality of life and survival of patients with brain cancer.

"Glioblastoma is one of the most aggressive of all cancers and it affects people of all ages. I am hopeful that the Ivy GAP tool will be a stepping stone for all scientists to move closer to a cure for brain cancer," said Catherine Bracken Ivy, founder and president of The Ben & Catherine Ivy Foundation.

"It's gratifying to see this project used by so many investigators in the research community to address clinically-relevant questions," said Ralph Puchalski, lead scientist on the project, now at the Swedish Neuroscience Institute. "Several recent studies which used the Ivy GAP demonstrate the impact it's having in the field of neuro-oncology."

"The Ivy GAP datasets are major resources for researchers in the field of neuro-oncology, particularly in the developing field of cancer stem cells," said Dr. Maciej S. Lesniak, Neurosurgeon-in-Chief at Northwestern Memorial Hospital. Dr. Lesniak and his team used Ivy GAP's local regional tumor analysis to more effectively identify drug target site efficacy in patients with glioblastoma. The results of this research were published in the Proceedings of the National Academy of Sciences.


Another team of researchers, led by neuro-oncologist Jeremy Rich, MD, Clinical Professor at the University of California San Diego School of Medicine, used the Ivy GAP in their quest to better understand the molecular mechanisms in glioblastoma tumors. Results of their studies were published in the journals Nature and Nature Medicine.

"Glioblastomas show striking diversity throughout the tumor, which is ignored in most scientific studies," said Dr. Rich. "As a clinician, I routinely witness our treatments work differently in different parts of the tumor, suggesting that the differences in location are critical to the outcome of patients. We have been using the Ivy GAP resource to understand how novel targets are differentially expressed within the tumor, which has allowed us to identify therapeutic strategies in development for clinical trials. This is a critical resource that benefits the whole community fighting this lethal cancer."

"This visionary contribution provides researchers with a map of glioblastoma that can direct researchers right up to the doorstep of this disease and opens the door to its biology at a scale never before thought possible," said Dr. Michael Berens, a Deputy Director of the Translational Genomics Research Institute (TGen), head of TGen's Glioma Research Lab, and one of the study's co-authors.


"It sets the stage for researchers to conduct more detailed analysis, characterize micro-environments, and understand how tumor cells interact with host cells. These studies will lead to improved clinical outcomes by pointing to novel therapeutic targets in future patients," said Dr. Berens, who helped select the genes explored in the study and linked up labs to provide tissue samples.


About the Allen Institute for Brain Science

About The Ben & Catherine Ivy Foundation

The Ben & Catherine Ivy Foundation, based in Scottsdale, Ariz., was formed in 2005, when Ben Ivy lost his battle with glioblastoma multiforme (GBM). Since then, the Foundation has contributed more than $82 million to research in gliomas within the United States and Canada, with the goal of better diagnostics and treatments that offer long-term survival and a high quality of life for patients with brain tumors. The Ben & Catherine Ivy Foundation is the largest privately funded foundation of its kind in the United States. For more information, visit www.ivyfoundation.org.

Translational Genomics Research Institute (TGen) is a Phoenix, Arizona-based non-profit organization dedicated to conducting groundbreaking research with life changing results. TGen is focused on helping patients with neurological disorders, cancer, diabetes, and infectious diseases, through cutting edge translational research (the process of rapidly moving research towards patient benefit). TGen physicians and scientists work to unravel the genetic components of both common and rare complex diseases in adults and children. Working with collaborators in the scientific and medical communities literally worldwide, TGen makes a substantial contribution to help our patients through efficiency and effectiveness of the translational process. TGen is affiliated with City of Hope, a world-renowned independent research and cancer and diabetes treatment center: www.cityofhope.org. This precision medicine affiliation enables both institutes to complement each other in research and patient care, with City of Hope providing a significant clinical setting to advance scientific discoveries made by TGen. For more information, visit: www.tgen.org. Follow TGen on Facebook, LinkedIn and Twitter @TGen.