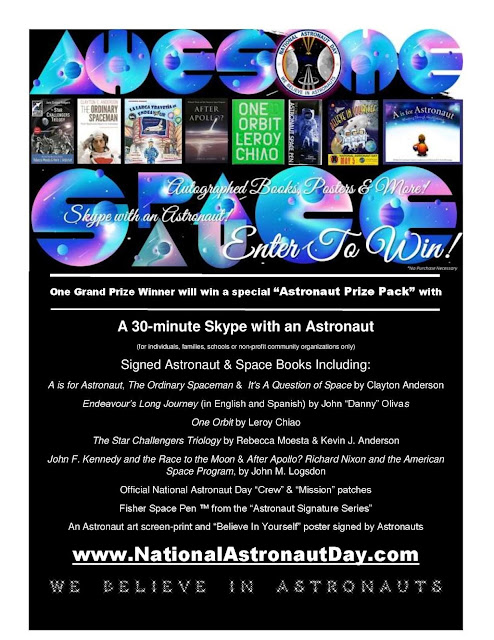 Today, to launch day 10 of the countdown, uniphi space agency, a division of uniphi good LLC, is proud to announce programming, events and additional information about the third annual National Astronaut Day, featuring Astronaut inspired STEAM and Space related activities, events and partners, to take place on, and around, Saturday, May 5th, 2018.

In keeping with the tradition of other Astronaut and Space related celebrations, May 5th was selected for this significant date in history in 1961 when Astronaut Alan Bartlett Shepard Jr. became the First American in Space, aboard the Freedom 7 Space capsule. The brief suborbital flight, which lasted approximately 15 minutes and reached a height of 116 miles into the atmosphere, was a milestone achievement. This trailblazing example of heroic bravery and adventurous spirit is this essence of what National Astronaut Day is all about. 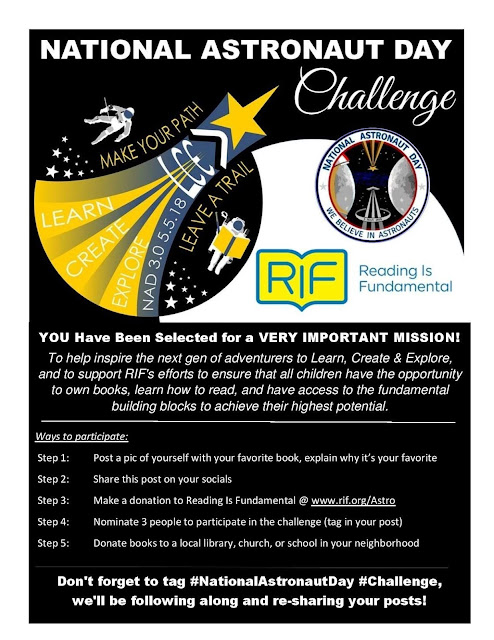 In addition to the previously released 2018 National Astronaut Day campaign overview, additional details and information about ways to celebrate and participate are being announced including:

Friday, May 4th
Astronaut Clayton Anderson will be speaking to students and signing copies of his book "A is for Astronaut: Blasting Through the Alphabet." This event will be in collaboration with Reading Is Fundamental, the nation's largest nonprofit organization for children's literacy, and State Farm as part of a Books for Ownership event to provide books and literacy resources to students at a Washington, DC-area school. Additional books will be given to students including the award-winning children's book, "Endeavour's Long Journey", by Astronaut John "Danny" Olivas and "The Star Challengers Trilogy" by New York Times Bestselling Authors Rebecca Moesta & Kevin J. Anderson. Book signing later in day at: 6:30pm E Hooray for Books! 1555 King St. Alexandria, VA22314, https://www.hooray4books.com/

Saturday, May 5
Astronaut Clayton Anderson will be signing copies of his book "A is for Astronaut: Blasting Through the Alphabet."
NOON – 1:30pm E
Goddard Visitor Center, 9432 Greenbelt Rd, Greenbelt, Marylandhttps://www.nasa.gov/centers/goddard/visitor/home/index.html

DreamUp will lead an "Astronaut in a Bottle" activity on Facebook, to demonstrate the concept of microgravity.
12:05pm E
https://www.facebook.com/dreamup.space/, http://www.dreamup.org/astronaut-in-a-bottle/

In honor of Astronauts and Exploration, Janet's Planet will be hosting a Facebook Live event about their Voyager Competition and how students can get involved.
2pm E / 1pm C
https://www.facebook.com/JanetsPlanet/, https://janetsplanet.org/

Astronaut Clayton Anderson will be signing copies of his book "A is for Astronaut: Blasting Through the Alphabet."
2:30- 4:30pm E
Smithsonian, 601 Independence Ave. SW, Washington, DC
https://www.si.edu/

Higher Orbits will be leading a "Design your Own Mission Patch" Facebook Live activity for students.
3:30pm E
https://www.facebook.com/higherorbits/, http://higherorbits.org/

Sunday, May 6
Astronaut Clayton Anderson will be signing copies of his book "A is for Astronaut: Blasting Through the Alphabet."
NOON - 2 pm
Udvar-Hazy Center, 14390 Air and Space Museum Pkwy, Chantilly, VA
https://airandspace.si.edu/udvar-hazy-center
Please check www.NationalAstronautDay.com for updates to the schedule and new events TBC.


DreamUp, Astronaut in a Bottle Activity

Please check www.NationalAstronautDay.com for activity updates, and to learn more about our partners.

Fans can enter an online contest to win an autographed collection of Astronaut and Space related collectibles. One Grand Prize Winner will win this very special "National Astronaut Day Prize Pack" including:


A 30-minute Skype with an Astronaut (for individuals, families, school or non-profit community organizations only),
Autographed Astronaut & Space Books Including;
"A is for Astronaut", "The Ordinary Spaceman" & " It's A Question of Space" by Clayton Anderson,
"Endeavour's Long Journey" (in English & Spanish) by John "Danny" Olivas,
"One Orbit" by Leroy Chiao,
"The Star Challengers Triology" by Rebecca Moesta & Kevin J. Anderson
"John F. Kennedy and the Race to the Moon" & "After Apollo? Richard Nixon and the American Space Program", by John Logsdon.
Official National Astronaut Day "Crew" & "Mission" patches,
A Fisher Space Pen ™ from the "Astronaut Signature Series",
An Astronaut screen-print and "Believe In Yourself" poster signed by Astronauts.

More information and ways to enter may be found at www.NationalAstronautDay.com .

Challenge:
The #NationalAstronautDay #Challenge will recruit Astronaut and Space fans to participate on social media. In addition to sharing their own personal stories of inspiration and motivation, Astronauts will join in and may even tag YOU to join the crew! The Mission is to help inspire the next gen of adventurers to Learn, Create & Explore, and to support RIF's efforts to ensure that all children have the opportunity to own books, learn how to read, and have access to the fundamental building blocks to achieve their highest potential.