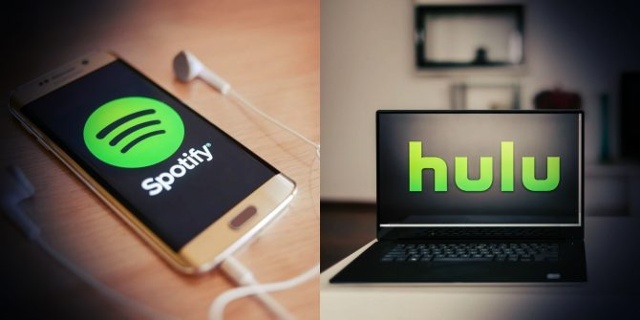 Spotify and Hulu launch a combined subscription bundle for $12.99 per month for Spotify Premium users, available to all users later this summer


Music and TV are better together, and streaming your favorite music and TV shows just got a whole lot easier. Following last year’s successful launch of the Spotify Premium for Students, now with Hulu bundle, the brands are expanding their original partnership, this time to offer entertainment fans nationwide an affordable, all you can stream bundle of their own. The new subscription plan, Spotify Premium, now with Hulu, brings the two popular services together and allows subscribers to enjoy a world of ad-free music on Spotify Premium, as well as the more than 75,000 current and classic hit television shows and movies on Hulu’s ad-supported service – all through a single $12.99-a-month subscription plan. Beginning today, existing Spotify Premium subscribers not only have early access to the $12.99-a-month bundle, eligible subscribers can also take advantage of a 99-cent promotional offer to try the Hulu Limited Commercials plan for three months as an introduction to the bundle. Spotify Premium, now with Hulu will be available to everyone this summer.

Just like the college student bundle, the new subscription plan combines Hulu’s Limited Commercials streaming library – with more than twice the number of episodes available than any of the other streaming services – and Spotify’s popular Premium subscription plan, both on the same bill, and all in one convenient package. In addition to Hulu’s popular original series like The Handmaid’s Tale, The Looming Tower and Marvel’s Runaways, the new bundle gives Spotify subscribers access to Hulu’s enormous offering of thousands of hit TV series and movies, including The Good Doctor, this season’s #1 new drama; Roseanne, this season’s #1 new series; fan-favorite This is Us; EmmyÒ Award-winning comedy Atlanta; popular hits like Family Guy, The Voice and Power, and entire series runs of beloved shows like Lost, ER, Seinfeld, Full House, Family Matters and more.


“Based on the outstanding performance of the Spotify and Hulu student package, it’s clear that consumers love to combine their music and television experiences together,” said Tim Connolly, SVP, Head of Distribution and Partnerships at Hulu. “Hulu and Spotify are brands that are defining how fans connect with entertainment in the future, and we are excited to expand our partnership to bring this combined package to all existing and new Spotify Premium subscribers.”


“Our student launch with Hulu was incredibly well received and we are excited to extend our reach by bringing Hulu to more of our Premium members in the US,” said Alex Norstrom, Chief Premium Business Officer at Spotify. “Hulu’s TV content is highly acclaimed, and with this exclusive Spotify offer we are bundling two top media platforms for an unbeatable price. This is just one example of how we can add value to our premium members day after day.”