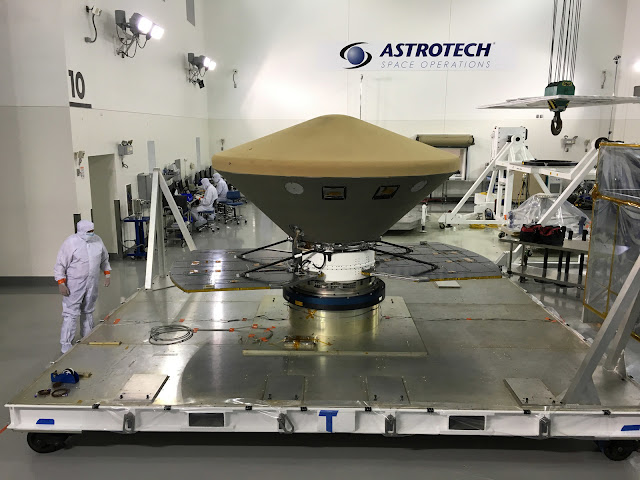 NASA's latest mission to Mars took its first trip on its long journey to the Red Planet. On Feb. 28, Lockheed Martin (NYSE: LMT) delivered NASA's InSight Mars lander to Vandenberg Air Force Base, California. The lander will now undergo final processing in preparation for a May 5 launch aboard a United Launch Alliance Atlas V 401 rocket.


The InSight lander will study the deep interior of Mars and will address one of the most fundamental questions of planetary and solar system science: how do terrestrial planets form? By mapping the basic structure of the planet, the mission will help scientists understand the processes that shaped the rocky planets of the inner solar system more than four billion years ago. Lockheed Martin designed and built the spacecraft and is responsible for testing, launch processing and spacecraft flight operations.

"InSight is an amazing spacecraft and we can't wait to see it on the surface of Mars later this year," said Stu Spath, InSight program manager and director of Deep Space Exploration Systems at Lockheed Martin Space. "We've worked closely with NASA's Jet Propulsion Laboratory (JPL) to design and build this spacecraft. Its environmental testing is complete, and now the launch team is moving to California to perform final preparations for a May launch."

The 1,380-pound spacecraft, consisting of the lander, aeroshell and cruise stage, was shipped aboard a U.S. Air Force transport plane, courtesy of the Air Force Air Mobility Command, in an environmentally controlled container. The plane, spacecraft and support personnel took off from Buckley Air Force Base in Aurora, Colorado and touched down at Vandenberg Air Force Base. While at Vandenberg at the Astrotech Space Operations facility, the spacecraft will undergo final processing including system-level checkout, propellant loading and a final spin balance test.

The InSight mission's principal investigator is JPL's Bruce Banerdt. The Centre National d'Etudes Spatiales (CNES), France's space agency, and the German Aerospace Center (DLR) are each contributing a science instrument to the two-year scientific mission. JPL, a division of the California Institute of Technology in Pasadena, manages InSight for NASA's Science Mission Directorate in Washington. InSight is part of NASA's Discovery Program, managed by the agency's Marshall Space Flight Center in Huntsville, Alabama.