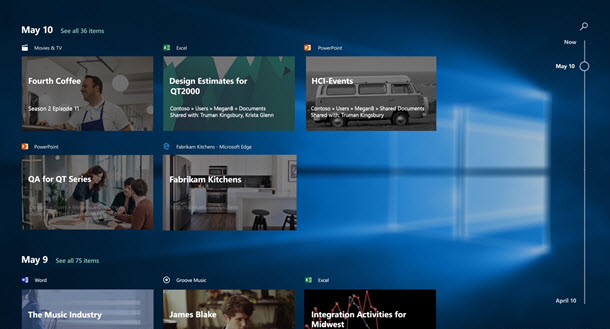 Microsoft is bringing tabbed window management to Windows 10 with Sets, so users can group different apps together, rolling out to testers over next few weeks

Microsoft: Check your inboxes! An email was sent out today to all Windows Insiders from Terry Myerson, Executive Vice President of the Windows and Devices Group, to talk about what’s coming for Insiders in upcoming flights.

First off – we will be bringing the feature Timeline to Insiders with the next flight. We demoed Timeline earlier this year at Build and it has been hotly anticipated by Insiders. Timeline is integrated directly into Task View and allows you to jump back in time to easily find the files, apps, and websites you’re looking for as if you never left. We’re really looking forward to hearing what Insiders think as they start using Timeline.

Second – we’re going to start doing controlled studies with some of new features for Windows 10 we’re working on. We’ve been doing this on a smaller scale – like trying out different Hub icons in Microsoft Edge to see which one people like more. Now we’re going to start doing these with entire features. This means that a smaller percentage of you will initially get certain new features in builds and others may not get these new features for a while, as we compare the usage and satisfaction of these features versus people who don’t. Eventually everyone will get these features—but it just could be awhile. With this approach, it also means that we will make these features broadly available when they are ready, not necessarily tied to the next major feature update of Windows 10.
In the coming weeks, one of the first features to take this new approach will be a feature we’re calling “Sets” (we may end up calling it something else by the time it ships).