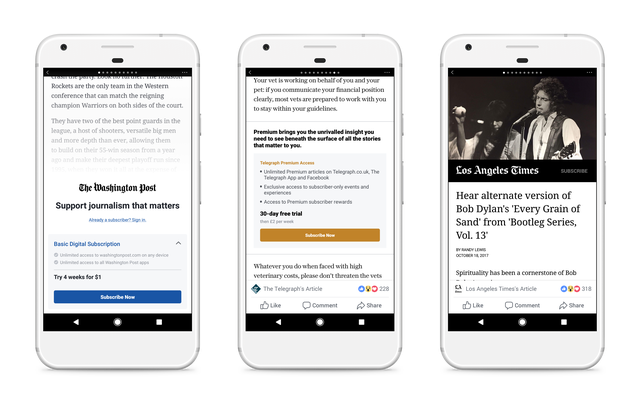 Facebook's news subscription tool is delayed on iOS over Apple's 30% App Store cut; the tool will roll out on Android phones over coming weeks

Over the next few weeks, we’re launching a test to support news subscription models in Instant Articles in partnership with a small group of publishers across the U.S. and Europe. This initial test will roll out on Android devices, and we hope to expand it soon.
This is a direct result of the work we’re doing through the Facebook Journalism Project. We’re listening to news publishers all over the world to better understand their needs and goals, and collaborating more closely on the development of new products from the beginning of the process.

Earlier this year, many publishers identified subscriptions as a top priority, so we worked with a diverse group of partners to design, refine, and develop a test suited for a variety of premium news models. We also heard from publishers that maintaining control over pricing, offers, subscriber relationships, and 100% of the revenue are critical to their businesses, and this test is designed to do that.
The following partners have been integral to building this product and we look forward to learning more together as the test gets underway: Bild, The Boston Globe, The Economist, Hearst (The Houston Chronicle and The San Francisco Chronicle), La Repubblica, Le Parisien, Spiegel, The Telegraph, tronc (The Baltimore Sun, The Los Angeles Times, and The San Diego Union-Tribune), and The Washington Post.