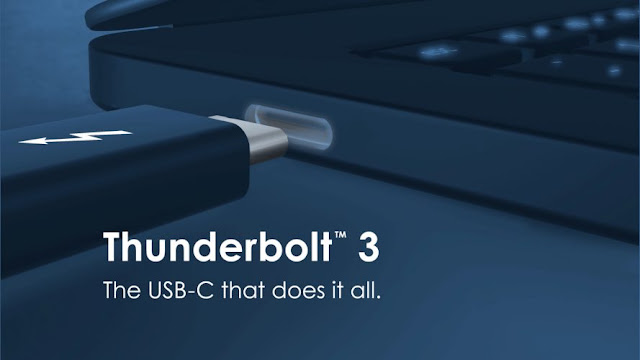 
Intel has a long history of leading the industry in I/O innovation. In the late 1990s, Intel developed USB, which made it easier and faster to connect external devices to computers, consolidating a multitude of existing connectors. Intel continues its I/O innovation leadership with Thunderbolt™ 3, one of the most significant cable I/O updates since the advent of USB.

Intel’s vision for Thunderbolt was not just to make a faster computer port, but a simpler and more versatile port available to everyone. We envision a future where high-performance single-cable docks, stunning photos and 4K video, lifelike VR, and faster-than-ever storage are commonplace. A world where one USB-C connector does it all – today, and for many years to come. With this vision in mind, Intel is announcing that it plans to drive large-scale mainstream adoption of Thunderbolt by integrating Thunderbolt 3 into future Intel CPUs and by releasing the Thunderbolt protocol specification to the industry next year.

“Apple and Intel have collaborated on Thunderbolt from the beginning, and as the industry leader in its adoption, we applaud Intel’s efforts to integrate Thunderbolt technology into its CPUs and open it up to the rest of the industry,” said Dan Riccio, Apple’s senior vice president of Hardware Engineering.

Microsoft has enhanced Thunderbolt 3 device plug-and-play support in the now available Windows 10 Creators Update. Intel and Microsoft plan to continue to work together to enhance the experience in future versions of the Windows operating system.

“Microsoft and Intel are working together to enable Thunderbolt 3 on Windows PCs to deliver on the ‘if it fits, it works’ potential of USB-C,” said Roanne Sones, general manager, Strategy and Ecosystem for Windows and Devices at Microsoft. “The Windows 10 Creators Update enhanced plug-and-play support for Thunderbolt 3 devices, with additional enhancements planned for future OS releases.”