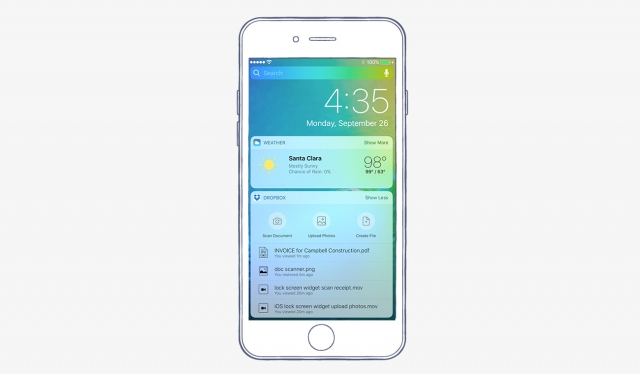 Dropbox announced some major enhancements for its iOS app.

Working from your phone or tablet can make a big difference in your productivity, but sometimes it’s still hard to match the efficiency of working at your desk. We want to change that. So today, we’re releasing a new Dropbox iOS app—and it has five new mobile productivity features that make working on your iPhone or iPad faster and easier,

Here's a look at what's new:

Sign PDFs right from Dropbox
Get back the time it used to take to print, sign, scan, email, or fax urgent documents. Now, as soon as a PDF gets sent your way, you can sign it directly in your Dropbox app.

Share Dropbox files in iMessage
Now you can collaborate with teammates right from where you’re chatting. Our new iMessage integration for iOS 10 lets you select Dropbox files from within iMessage and share them in-line with the conversation, instead of switching back and forth between apps.

Create and view files without unlocking your phone
Want a shortcut to some of your most common Dropbox workflows? After updating to iOS 10, just add the new Dropbox widget to your lock screen. From there, you can quickly create, view, and upload files, and even scan docs or receipts into Dropbox.

Stay up to date when you view files on mobile
Keep on the same page as your team, even when you’re away from your desk. Our updated app notifies you as soon as someone saves a new version of a file you’re viewing—and with just a tap, you can reload to see what’s changed.

Share screen time on your iPad with other apps
With support for picture-in-picture, you can now watch a video from your Dropbox while working in another app on your iPad. And in the coming weeks, we’ll be launching split-screen support that lets you work seamlessly within Dropbox and other apps at the same time—without having to toggle back and forth.