Why You Should Ride a Bike to Work 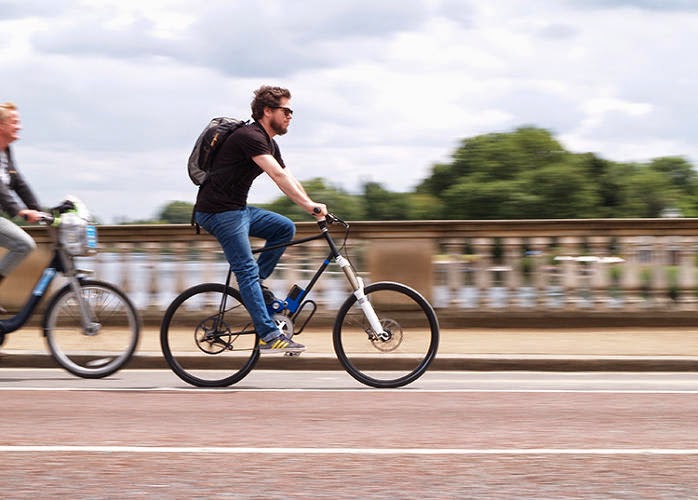 The morning commute can often be a nightmare. Gridlocks on all major roads, engine trouble with the car, delayed bus timetables, and trains being held up because of leaves on the line. Walking isn’t always feasible either, especially given the crush of people and the distances involved. Because of all this, many people have elected riding a bike to work as a greener, healthier, and more convenient alternative.
Naturally biking is no good if you’re working in a business on the opposite end of a town several miles broad, but for those who can make the journey then there are many reasons to recommend cycling to work.

Here are but a few of the perks to be had:

It’s Cheaper Than Your Car

It has been estimated to cost around $8,000 on average to run a car each year, and gas prices are always unpredictable at best. While motorists are enjoying low gas prices at the moment, they can’t be expected to last, and that doesn’t stop car insurance, registration, repairs and parking fines from eating into your wallet -- to say nothing of how expensive it can be if your car breaks down entirely and needs to be replaced.

A bike, meanwhile, costs a mere $308 a year to keep on the road, and you can save a large sum of money in gas costs alone. Bikes are also many times less costly than cars to replace, and have far lower repair costs.

Compare the amount of exercise you do driving a car or catching a bus to riding a bike to work, and you can quickly work out the health benefits -- pun intended. In your first year alone, you could stand to lose as many as 13lbs cycling to and from work. It’s also highly effective cardiovascular exercise, which will help reduce cholesterol and improve your effective lifespan.

There’s also the angle of public health. Bus or subway transport is a haven for spreading coughs, colds and other bugs around due to the amount of people forced into a constrained space. This doesn’t exist while biking, so you can expect to catch fewer illnesses on top of reaping a much stronger physique and constitution.

You Can Claim Tax Breaks

That’s right. If you cycle to and from work each day you are entitled to a $20 a month tax claim for all bike-related expenses. That’s $240 a year, no small sum, and makes cycling to work even more economical than your car. This includes expenses such as bike storage and repairs. You need to cycle to and from work at least three times a week in order to qualify.

Parking costs can run you a fair amount of money each year, so imagine how liberating it must be to never use another paid lot again. Not only is this cheaper, but you no longer have to worry about your car or items within it being stolen while at work ever again. Most companies provide secure bike storage on-site that is usually free, while some cities such as New York even legally require companies to provide some form of bike storage on their premises.

There’s also the option of folding bikes. That’s right, you can fold a bike away and carry it into your office in a small briefcase-sized box, so you don’t even need to hunt for a space on the bike racks if you don’t want to.

You Don’t Even Need to Own A Bike

Many cities such as Washington DC, Miami, Boston, and Chicago are now offering rentable bikes to the public. For a small fee, you can have a thirty to forty-five minutes to use a bike to get wherever you need to be, which should be more than enough time to get to and from work. New York’s bike rentals cost $95 a year. $10 less than it’d cost to use the subway in one month. So there’s no less excuse than ever to not bike to work.

Of course, keep an eye to how bicycle-friendly the streets are on your route. Even if you do your due diligence, yourself, there's never a guarantee that others will do the same. Always travel with your cell phone and keep the number for emergency services handy -- as well as a good personal injury lawyer like David Heil, in case the worst should ever happen while you're on the road.


Author Bio:
Christian Mills is a freelance writer and professional student who offers opinions and articles on a variety of topics affecting the home and student life.