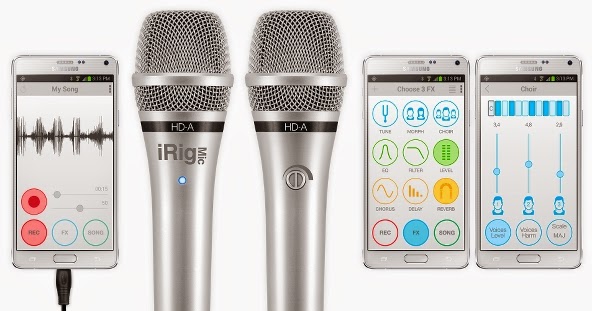 November 20, 2014 - IK Multimedia, the leader in mobile music apps and accessories, is pleased to announce another breakthrough in mobile music creation: the release of EZ Voice™ and iRig® Mic HD-A. Together they bring real-time vocal processing and digital audio microphone recording to Android devices for the first time.


With EZ Voice, users will be able to enjoy real-time vocal processing and recording on the latest generation of Samsung devices with Samsung Professional Audio, such as the Samsung Galaxy Note 4, Galaxy Note Edge and more. 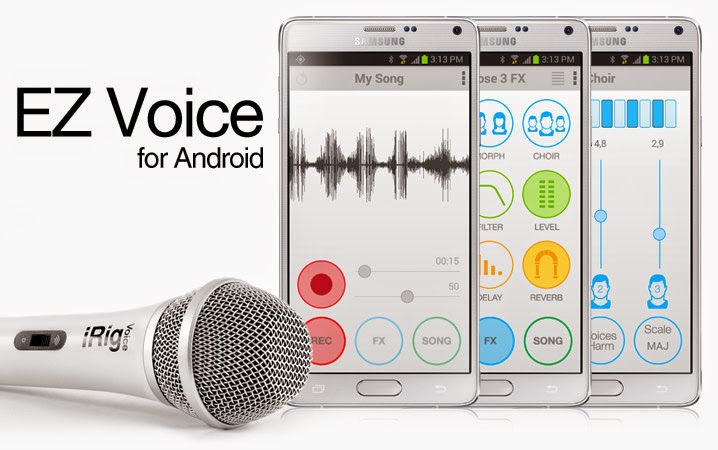 Real time vocal processing on Android
The new EZ Voice for Samsung Professional Audio devices offers a simple and intuitive way for every singer to create and capture great sounding vocal performances while on the go.

EZ Voice users can process their performances with effects in real-time by applying up to 3 of the available 9 high-quality effects. EZ Voice includes traditional studio standbys like Reverb, Delay, Chorus, EQ, Filter and Level. It also features creative options such as Tune, Morph and Choir, which let users apply more radical alterations like changing a vocal performance's key or gender or even adding in extra voices and harmonies. Users can apply these effects individually or select from a number of included presets for a truly immediate recording experience.

EZ Voice also features a streamlined interface that takes the work out of the recording process - it lets users import any song from their music library and use its included "NO VOICE" function to quickly remove the original vocal track. It clears the way for anyone to step in and give a show-stopping performance.

The new Samsung Professional Audio compatible devices come with Samsung Soundcamp, a free and fully-fledged music studio app that lets musicians record and compose full songs entirely within the device. The EZ Voice app can be used as a standalone application but also as a plug-in inside the new Soundcamp studio for full recording and play-along uses.


Digital audio capture on Android
And now Samsung and all Android 5 users can enjoy high-quality digital recording thanks to iRig Mic HD-A. It's the first pro-quality digital microphone for Android that allows plug-and-play connectivity via its included USB OTG cable (an additional USB cable is also available for use with PC). The input signal can be set using the onboard gain control while a multicolour LED provides sound level monitoring.

Featuring a 24-bit audiophile-grade A/D converter, a 44.1/48 kHz sampling rate and a low-noise/high-definition pre-amp, iRig Mic HD-A offers unmatched versatility: Singers can perform and record their voices. Musicians and audio engineers can record instruments in the studio and on stage. And broadcasters and journalists can record interviews and other audio sources while in the field. In all cases, iRig Mic HD-A produces recordings with high-fidelity digital sound and superior clarity previously unavailable on the Android platform.

Along with the iRig Mic HD-A, users can also choose from IK's current range of analogue microphones, such as the iRig Voice, iRig Mic and iRig Mic Cast. All of these use the mini jack for the input/output connection with the device. Now singers, vocalists and everyone who needs to capture high-quality audio on their Android devices have multiple options suiting a wide variety of needs, applications and budgets.

But there's more to IK's line of microphones than EZ Voice, they're also compatible with iRig Recorder (IK's quick and easy audio recorder) and any other Android app that uses the mini jack or USB input to record and capture audio.


Pricing and availability
The new EZ Voice app for Android/Samsung Professional Audio is available through the Samsung Galaxy Apps store for only $4.99/€4.49. A free version is also available. EZ Voice and iRig Recorder are also available on the Google Play store.