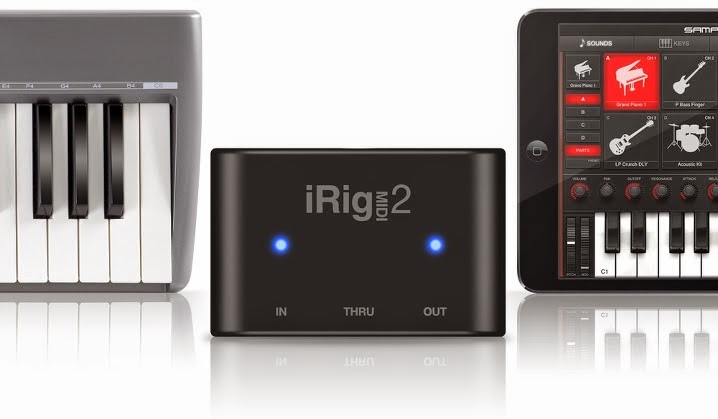 Universal ConnectivityiRig MIDI 2's Lightning connector provides out of the box connectivity with iPhone 5s, iPhone 5c, iPhone 5, iPad Air, iPad (4th generation), iPad mini and iPod touch (5th generation). In addition, iRig MIDI 2 also works with all earlier generations of iPhone, iPad and iPod touch with an optional 30-pin connector as well as Mac and PC via its included USB cable. iRig MIDI 2 is so flexible because all of its cables are fully detachable and interchangeable via its Mini-DIN connector: Users can swap out Lightning connector, 30-pin connector and USB cables on the fly, which allows for quick switching while on the move. All cables are bumper friendly, which means that iRig MIDI 2 can be plugged into mobile devices without having to remove any protective case.Mobile MIDI Like Never BeforeFor musical instruments or other device connection, iRig MIDI 2 comes equipped with three standard-sized female MIDI DIN sockets: IN, OUT and THRU. These allow for full MIDI functionality and connectivity with any MIDI-enabled device: keyboards, hardware synthesizers, software sound modules, drum machines, drum pads, DJ controllers, pedal boards, DAW interfaces and more. iRig MIDI 2 sports two blue LEDs that provide at-a-glance monitoring of the MIDI data passing through the IN and OUT sockets.Ultra-compact, Portable and DurableiRig MIDI 2 is small - so small that it can be easily carried in a pocket to any gig, performance, studio or jam session. It draws its power directly from its host device, which removes the need for bulky power supplies. Lightweight and durable, it features a rubberised enclosure built to withstand the rigors of travel.A Full Suite of Companion AppsWith iRig MIDI 2, there's more than just MIDI. It comes with a full suite of music creation apps that make it usable straight out of the box. iOS users get two of IK's most popular mobile apps via App Store download: SampleTank® FREE is a sound and groove workstation filled with hundreds of high-quality instruments and patterns. iGrand Piano™ FREE is a concert-quality piano app that puts world-class piano sounds at your fingertips. Both apps contain exclusive bonus sounds that are unlocked when iRig MIDI 2 is registered. Mac and PC users can enjoy the full creative power of SampleTank® 3 SE, a free special edition of IK's next generation SampleTank® 3 desktop sound workstation. Beyond all that's included, iRig MIDI 2 also works seamlessly with all MIDI compatible Mac and PC software, plus the entire spectrum of Core MIDI apps for iOS; such as GarageBand, Cubasis, Music Studio, BeatMaker 2, Animoog, Korg Gadget and many more.The SampleTank FREE App is available for free from the App Store on iPhone, iPad and iPod touch or atwww.appstore.com/sampletankfreeThe iGrand Piano FREE App is available for free from the App Store on iPhone, iPad and iPod touch or atwww.appstore.com/igrandpianofreeSuperior Italian Design and ManufacturingiRig MIDI 2 has been designed and manufactured in IK's own factory in Modena, Italy. Like all IK products, it's been through rigorous 100% quality testing to ensure the utmost in dependability and is made within the highest manufacturing and environmental standards. IK Multimedia uses only the best components, materials and processes to create solid, smartly manufactured products at an affordable price.Pricing & AvailabilityiRig MIDI 2 is available now from music and electronics retailers worldwide and from the IK Online store for only $99.99/€79.99 (excluding taxes).For more information, please visit:www.irigmidi.com