What Do We Know About The New Apple Mac Pro?


Perhaps the most memorable moment of WWDC 2013 was when Apple’s Phil Schiller unveiled the new Mac Pro 2013. After showing a characteristically polished video, Schiller came out with one of the best lines since the glory days of Steve Jobs.
“Can’t innovate anymore my ass,” he quipped to rapturous applause; and given Apple’s recent product launches have been somewhat lackluster, his words were especially poignant.
The all-new Mac Pro, scheduled for release sometime this autumn, is the very definition of innovative. Of course, there is the radical design – a piano black cylindrical tube, which looks as though it would be better placed in the warp drive of Enterprise than on the desktop of a prosumer.
Then there is the size; this professional grade workstation measures in at just 9.9 inches tall and has a diameter of 6.6 inches. To put this in perspective, that is smaller than an iPad and has less of a footprint than a Mac Mini.
The obvious assumption at this point is that with such a shell, the Mac Pro must be lacking somewhere under the hood. Such assumptions should be dismissed right this very second… 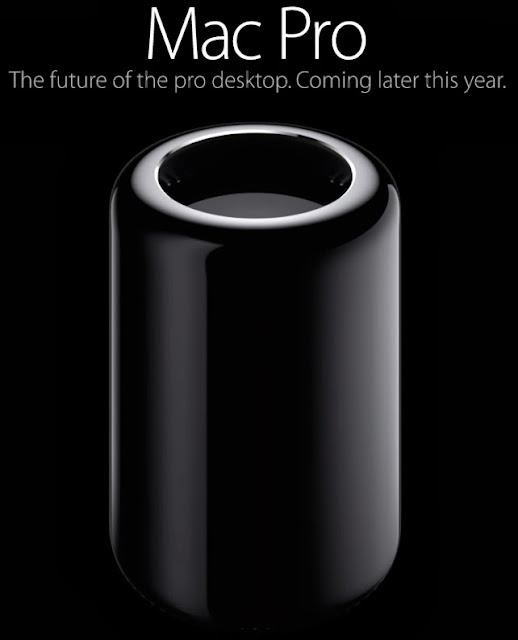 Under the curved hood.

The new Mac Pro is sporting…wait for it...
The next generation Intel Xeon E5 Ivy Bridge CPU – boasting up to 12 cores, dual AMD FirePro GPUs with up to 6GB of VRAM and 1866MHz ECC RAM.
Port wise, there is dual Gigabit Ethernet, HDMI 1.4, Thunderbolt 2.0 with DisplayPort 1.2 (which Apple says can support for up to three 4K displays), 802.11ac wireless, Bluetooth 4.0 and the flash has taken a big step forward with PCIe-based storage.
This is all masterfully engineered to fit the cylindrical case, which has just the one (turbine-like) fan, cooling absolutely everything.
Some of the above specs are a given. Apple was always going to include wireless capabilities, given the speeds that .ac can achieve.
Shifting to PCIe-based internal storage as standard is an excellent move. SATA3 reaches terminal velocity at 600MBps, so as the next generation of SSDs hit the market, this interface will quickly become the weakest link.
As for the dual (yes dual) GPUs, the chips will come from AMD's FirePro range although it has not been announced exactly which cards are to be included.

What is the catch?

The naysayers, and there are plenty of them, have quite a few criticisms of this all singing, all dancing, micro Optimus Prime of workstations.
By far the biggest complaint is the lack of upgradability and this certainly is a valid concern. For many design professionals, the average life-cycle of a premium workstation tends to be three to five years and in the world of technology, five years might as well be an eternity. If you are going to invest this kind of money, it would be nice to know that in three years’ time, it is not going to be a piece of legacy hardware. Alas, the only thing that seems upgradable is the RAM and even then, there are only four slots so anyone looking at pushing beyond the 16GB range should expect to pay big money for the privilege.
Then there are many Mac specialists that have concerns about cooling, with others suggesting that one fan is simply not enough to cool such industrious hardware. A legitimate concern to be sure; but if Apple is anything, poor designers they are not. They know full well, the type of strain that these workstations will be placed under and we are certain the new Mac Pro will take everything that you have to throw at it.

The truth is that there will always be allies of a product such as this; just as there will always be enemies.
Whichever trench you have planted your flag in, it does not really matter. It is hard to refute that Apple has done a good job at putting a cat amongst the pigeons – in terms of design, engineering and of course, innovation.
Will design professionals take to a black cylinder? Will the lack of expandability prove to be the device’s downfall? Who knows…
At this stage, there is only one certainty; just when we were all worried that Apple had lost the ability to step up to the plate and give us something fresh and original, the new Mac Pro came along and told us all to put a sock in it. Good on you Apple. Good on you.


Author Bio:
Claire is an Apple Enthusiast with over 10 years’ experience sitting at the helm of a Mac Pro, doing what she does best! A fully certified Mac Professional, Claire is a foremost expert on all things Apple.