Thursday, August 15, 2013
The residents of Georgia will soon be the proud financial backers of an out of this world public high school with a jaw dropping cost. At one hundred forty seven million dollars this high school will be the most expensive public school ever built in Georgia. The school houses a staggering eleven stories, nine hundred car parking deck and floor to ceiling glass walls that overlook expanses of landscape fit for an executive. 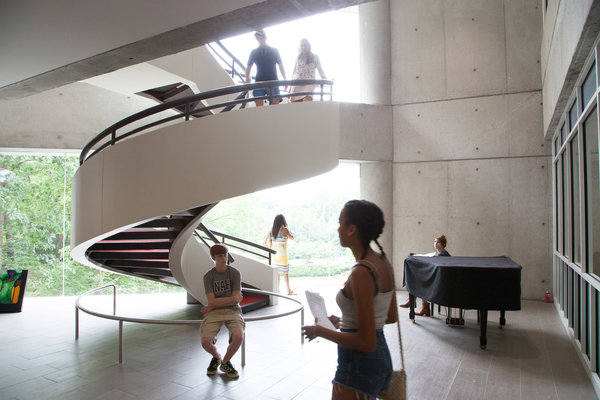 It’s baffling to most, the idea of simply imagining thousands of teenage students walking into class in an old I.B.M. office building. These teens will also be walking into a controversy seemingly fit for Republican lawmakers to create talking points from. Many have argued that the school’s costs are ludicrous and a disrespectful use of taxpayer funds. Yet it’s hardly the most expensive school in the country let alone the most expensive high school.  That title has been claimed by a school in Los Angeles going by the name of the Robert F. Kennedy high school. That school cost a reported five hundred and seventy eight million dollars. That figure is a true jaw dropper; it only gets worse when compared against other structures. In one such comparison, it’s noted that the LA school cost more money than Beijing’s Olympic stadium.

Those of my readers who frequently check up on news in all of its forms will already be familiar with the Georgia school cheating scandal that occurred in March of this year. The scandal shook up the Georgia public school system, resulting in an astonishing thirty five educators indicted. This newly constructed high school is a chance for Georgia to reset its education back to where it needs to be. Still one can only hope that this fine building will be used properly and without any more educational misconduct on the part of its staff. Time will tell if Georgia has truly changed its ways when it comes to education.

While some politicians may be grasping at the price tag of the school in an effort to outrage the public, those living in the area seem largely pleased instead. Most of the parents within the schools district welcome the chance to send their kid to this multi-cultural urban high school. Some even praise the state of Georgia, referring to the school as a ‘gift’. It certainly seems as if most parents in the area have a positive outlook on this new mega school constructed in their backyard.

First I have to express my jealousy at the teenagers who will be attending North Atlanta High, as it will be called. The school is positively beautiful and awe inspiring. Its cafeteria resembles a mall food court, it has elevators for student use, spiral stair cases, and minimalist design hints that could truly inspire up and coming artists, musicians, writers, and poets. The question that remains to be answered is in regards to quality. Will this school peel back the negative reputation that has encased the Georgia public school system? Or will it simply fall back to its old ways, re-casting a negative reputation upon the entire state government.


This article was provided by Eduardo Dieguez from PrestigeTracker.com. He is currently in pursuit of his AA Degree at Valencia CC. An avid computer enthusiast, Eduardo spends countless hours tinkering with electronics both new and old.