The Evolution Of Communication


Since the dawn of time, humans have had to communicate with each other in some way or another. Even when the world’s population was completely separated by oceans, local communities on the same land mass would still encounter problems with distance. This subsequently led to ingenious albeit sometimes primitive methods of communication in order to overcome this very important issue. Here we take a look at human communication over the last 8000 years to date. 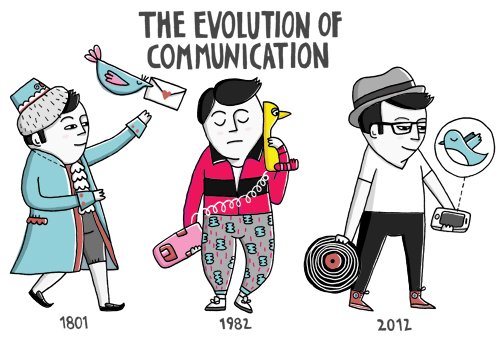 The earliest documented evidence of communication came from Africa, where in 6000 BC; drums would be used to send messages between tribes. These messages could actually travel up to 100mph. This is even more remarkable when you consider it took over 5000 years after this for the first postal service to be invented in Ancient Persia. The Ancient Egyptians had a courier service in place in 2000 BC but it was the Persians who pioneered a more organised system. It was said to have been first ordered by Cyrus the Great with the prime purpose of intelligence gathering. It wasn't long before, many other civilisations followed suit with their own versions of mailing systems.


It was in China in 200BC when we first saw the use of smoke signals as a form of communication. The Chinese would use these signals to warn of military threats along the Great Wall of China. This is a method which was also favoured by Native American Indians as they attempted to fend off European invaders in the 1500s.

From the early 18th century, experiments were conducted by various scientists to try and improve the method of communication over long distances. It was Stephen Gray who in 1727 successfully transmitted electricity over a total distance of 700 ft via a wire suspended in the air by silk threads. However it was an artist by the name of Samuel Morse along with two physicists Joseph Henry and Alfred Vail who developed the first fully fledged electrical telegraph system. A code was needed to translate the electronic pulses into language and this led to what we now know as Morse code. By 1895, Western Union were transmitting over 58 million telegraph messages per year.

With the arrival of powered flight, letters were widely used and sent via airmail. This meant that hand written letters cold be received across the world in a matter of days as opposed to weeks and months as was the case with mail sent by sea.

However, it was the emergence of the World Wide Web which really revolutionised global communication. The internet introduced us to the email which is probably the most important medium of communication used in the 21st century. Emails have allowed us to send letters to anyone, anywhere in the world instantly. They allow us to include attachments such as documents and photographs which would have most likely been seen as witchcraft to our ancestors. Apart from the obvious speed advantage, emails are sent free of charge with no limit on the amount sent each day regardless of where in the world you send them too.


Probably the most notable change in the way we communicate has to be highlighted by the mass domination of mobile phones. These devises are arguably the greatest invention of the 20th century. The ability to talk anywhere without being restricted to a fixed telephone landline is a luxury most of us have embraced. In fact it’s hard to imagine a life without mobile phones especially since the introduction of smartphones since we tend to organise most of our lives by the swipe off a screen. This has also led to our social lives being increasingly dominated by social media sites such as Twitter and Facebook.
Only time will tell what the future of telecommunication has in store for us but the future surely does look bright!

Author Bio:
Thank you to Jenny Ann for this article. Jen loves travelling and uses all forms of communication to speak with people abroad, through the Dial to save India cheap calls her communication lasts longer!